‘The Lady in the Van’ follows the 15 year development of an improbable and unconventional friendship between playwright Alan Bennett and his squatter Miss Shepherd.

‘The Lady in the Van’ follows the 15 year development of an improbable and unconventional friendship between playwright Alan Bennett and his squatter Miss Shepherd. This autobiographical story is uniquely told in a continuous monologue that left the whole audience grinning throughout.

As an initial three month parking stay in Bennett’s garden comes to a fifteen year residency, we view Miss Shepherd’s life story through a handful of immersive ways. Sarah Mann (actor of said Lady in Van) hoped that her rendition of the play would be “a funny and poignant tale about the generosity of the human spirit, possibly.”, and with a multi-rolled cast fuelled with great comedic timing, I feel she did use that.

Many people may be aware of the film, which has a more structured and linear storyline in comparison to the play. The play follows a more stylised structure which became slightly hard to follow due to an absence of set change, yet it never became uninteresting as each character and scene offered a different sense of comic relief to themes that were relevant the given time. Being set in the time span of 1974-1984, the dated set design combined with the location of the Brighton Open Air Theatre (which offers a theatre in the round stage) helped immerse the audience to a time of a communist and capitalist divide, the Cold War and troubles of the era- all of which were portrayed through blatantly funny jokes.

One could view the story of Miss Shepherd’a life confined to the van as an experience similar to the lockdown and restrictions people all over the world have faced. Her redemption at the hand of a compassionate passer leaves the audience with something to think about in relation to the worlds current situation. Perhaps push to reminisce on life and its deeper meaning. “It’s a life”. A quote from one of the final monologues given by the younger Alan Bennett that offers a sense of simplicity to such an absurd, yet true, story. The development of their friendship and Miss Shepherds tale of redemption was beautifully and wittily told by the Sarah Mann Company. 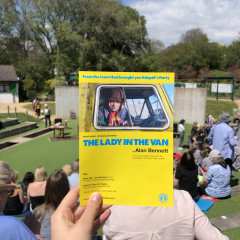 Brighton Fringe Review: The Lady In The Van

‘The Lady in the Van’ follows the 15 year development of an improbable and unconventional friendship between playwright Alan Bennett and his squatter Miss Shepherd.