Looking back on a superb portrayal of a Greek classic.

Following my research on Ancient Greek theatre, I was intrigued to see some more modern interpretations of the original text. With my new subscription to National Theatre at Home (a saviour during lockdown), I came across the 2012 production of Antigone. This story is fascinating to me, as the main point of conflict is between the state and the laws of the Gods. This conflict has stayed present over a thousand years later, as the disputes between government rules and religious laws have caused outright wars throughout history. Even though Christianity in particular has become less prominent, especially in England, director Polly Findlay notes that there is still an integral conflict to be represented, which is between government law and our own personal sense of morality.

National Theatre's 2012 production of Antigone, in a version by Don Taylor, explores this dispute that takes place between uncle and niece, state and religion, young and old, in a raw, industrial setting in what looks like the 1940s. The colour palette of the set and costume is quite bleak, using lots of earthy browns and greys. Upon first glances, it looks quite dull and soulless, indicating the lack of sentiment in Creon and his way of ruling. Though the set and costume resemble the mid 20th century, it is still relatively bare and free of specific reference, allowing the audience to identify the story as an ageless one. Ultimately, the ancient text didn't sound foreign to the male-dominated, industrial business set that was created by Soutra Gilmour.

What Christopher Eccleston (Creon) notes is that one of the focal points of the drama is the family dispute, a tale as old as time and something that everyone can universally relate to. Sisters Antigone (Jodie Whittaker) and Ismene (Annabel Scholey) are young women trying to find their way in the world under the shadow cast by their parents, a situation many people can find themselves in, whether that shadow is a favourable one or otherwise. It is these elements of the story that have ultimately helped this play stand the test of time.

Creon, King of Thebes, is a fierce patriot and rules like a dictator, however, Ecclestone's performance paints a three-dimensional character who firmly believes that his actions are for the greater good and sees no fault in his decisions. Though his inability to accept criticism or advice is frustrating for the audience, Eccleston's Creon was so truly performed that it is impossible not to see a million people in his place. The believability makes the story all the more tragic, and Antigone's downfall all the more heartbreaking.

Ultimately, this performance was a devastatingly real portrayal of ancient conflicts that have remained just as prominent today, with no sign of truce in the distant future. Each character was so well-constructed and performed in this Greek Tragedy, with little and unexpected sparks of humour which provided a wonderful balance and realistic dynamic between the family on stage. 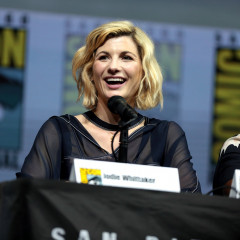 Looking back on a superb portrayal of a Greek classic.