A modern take on Euripides’s tragic classic, The Bacchae, Echo / Chamber tells its own story, exploring themes of queerness, social media and data surveillance. The production stars Isaac Hesketh and Oliver McFadden (also co-director and writer) as Drew and Paul, though both characters represent Dionysus and Pentheus respectively. Rather than being a conventionally linear production, Echo / Chamber allows for audience interaction, with two clickable choices being presented at the end of each scene, determining how the next plays out.

Praise must be given to the starring duo, with Hesketh in particular offering a roguish, yet nonchalantly charming performance that captures the Dionysian essence of their character. The chemistry between Hesketh and McFadden underpins the production, with tense and at other times, playful interactions between the pair, making for an engaging viewing experience. Sophia McLean also features in a voiceover role in between scenes, providing a reflective pause for viewers as the show continues to unfold, while emphasising the importance of choice.

Additionally, Echo / Chamber impressively uses the framework of The Bacchae to explore themes that are relevant to a modern audience, including ideas about the traversal of sexual identity, the anonymity (or lack thereof) of social media and family.

However, the show falters in parts due to its production. At times, the audio in scenes is muffled, with the dialogue consequently suffering as I was unable to clearly understand what was being said without the aid of subtitles. Camera zooms can also be jarring when they occur quickly within scenes, briefly disrupting the sense of immersion generated by the show. Furthermore, there were instances where there would be a pause between scenes after I had made a choice, with this feeling uncomfortably long in parts. The choices themselves initially feel as though they have minimal impact on the piece’s overall plot, though this does change as the narrative moves towards its conclusion.

Despite its shortcomings, Echo / Chamber is a refreshing modernisation of The Bacchae that deserves viewing at this year’s Brighton Fringe. 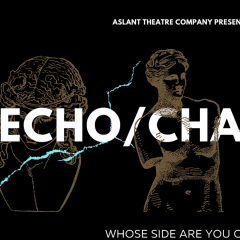