By turns an autobiography, travelogue and meditation on language, Polly Barton’s Fifty Sounds is an eclectic study on what it means to teach – and learn – a language, as told through fifty mimetic sounds.

The book, which won the 2019 Fitzcarraldo Editions Essay Prize, begins with a humorous and critical review of Duolingo, the infamous language-learning app that promises to teach users a language in “15 minutes a day”. As opposed to the passive language-learning such apps offer, Barton makes clear from the outset that she wants to “talk about … sensory bombardment”, the act of being physically taken over and possessed by a language that turns your head into an “echo chamber” resplendent with not just new words and a new grammar but a whole new set of ideas encoded therein. Language learning is presented as an intimate and sensory act, one which is not unlike falling in love with and getting to know a new partner.

This is an appropriately passionate and bombastic introduction to a book concerned with love of language and languages: the way we perceive them, and how the languages we know inevitably construct our perceptions of the world. What follows is a long-form essay that attempts to unravel the nuances of a vastly different culture as contained and shaped by its language. By extension, the book reflects on what we can learn about our native tongues and, in turn, ourselves.

Each chapter in this extraordinary essay-come-autobiography is headed by one of the titular Fifty Sounds. These “sounds” are Japanese mimetics: verbal sound-units not unlike metaphorical onomatopoeia whose aural patternings reflect ideas rather than physical processes. Even before we are treated to Barton’s perceptive insights, rendered in beautifully novelistic prose perfected through years of working as a literary translator, the author gifts us with personalised takes on the meanings of these mimetics, their slippery translations affording non-native Japanese speakers a brief glimpse into not just a foreign language, but a whole worldview that requires cultural context to adequately understand. Barton’s renderings of these mimetic definitions range from the profound (“giro’: the sound of eyes riveting deep into holes in your self-belief”) to the flippant (“beta’: the sound of very sticky fingers”); and from the humorously bawdy (“giza-giza: the sound of … having your c*ck incomprehensibly sucked’) to the intimately sensual (“jin-jin: the sound of being touched for the very first time”), as Barton philosophically tackles a whole range of emotions and ideas.

Just as compelling as Barton’s essayistic and quasi-philosophical socio-linguistic musings, which encompass everything between the difficulty of achieving a true translation and how relationships are encoded through language, is the renowned translator’s personal narrative. Fifty Sounds is as much an autobiography as it is an essay, presenting a first-person account of what it is like teaching English in a foreign country. Broad and in-depth linguistic insights are complemented with personal vignettes that expand on the basic summaries of each mimetic sound, filtered through prose that is at once vivid, humorous and elegant.

Barton’s personal vignettes never stray from the heart of the book’s message; namely, that language and culture are delicately intertwined, each inseparable from the other. Nevertheless, these manage to be deeply affecting and moving – the author’s ability to craft a narrative is as accomplished as her academic insights. Each anecdote explores in further detail the mimetic sound it appears under, formally evoking the idea that language learning is more than simply getting to grips with grammar and words; rather, it is a process of continuous renewal, with always more context to be learnt, more cultural factors to be understood. These autobiographical snippets come together like mosaic pieces to form a unified story; Barton’s relationship with a Japanese teacher of English, Y, forms much of the narrative thrust of the book. As humorous and deeply affecting as these vignettes often are, they also offer practical insights into the difficulties of actually using a ‘learnt’ language: the time that Barton almost accidentally revealed her affair with Y by using a personal, rather than polite, honorific comes to mind.

That is not to say that Fifty Sounds is an extended study in othering Japanese. Rather, the profound differences across Barton’s two target languages (English is as much a subject of the book as her adopted tongue) work both ways, shedding light on some of English’s idiosyncrasies and tasking readers to consider what social codes and practices are encoded in and disguised by our own language.

Barton is also too self-aware to fall into the trap of fetishizing the arguably neo-colonial practice of privileged Westerners travelling to Asia to teach English as a foreign language. Throughout Fifty Sounds, Barton struggles with the feelings of isolation and alienation that come with being thousands of miles away from loved ones, regardless of how well-integrated into a society we become. Moreover, she reflects on the responsibility language teachers have towards “the existing community”, reminding future TEFL teachers to avoid imagining “the rural paradise you move into as a blank canvas for personal growth”. Nor does the author present a sterilised and stereotyped Japan: resplendent with natural beauty, Barton’s Japan is nevertheless plagued with social problems, and at one point the book comes close to criticizing Westerns’ imagined views of the country that come from anime and videogames alone. Idealized travelogue this is not.

In a world contradictorily both oversaturated with apps for “language learning” and one in which all languages are constantly cheapened by social media, Fifty Sounds celebrates the act of getting lost in languages new and known, discovering in them not just a re/new/ed lexicon but a novel way of seeing the world; of learning to communicate with others to develop empathy and understanding; and, through this childlike lens of perception, of better understanding ourselves. If the “languages with which we grew up” really “are the building material through which our very selves are constructed”, by truly and immersively learning a new language, or renewing our vows with our own, we can re-construct ourselves and the ways we see the world.

The metaphor of renewing our vows is apt. It is no accident that Fifty Sounds likens language-learning to “erotics”, evoking the sensual intimacy of learning languages “with our bodies.” Barton presents languages as things we absorb, invite to become part of us, through which we eventually stumble “into the recesses of” thought where “language and imagery and feeling all come together.” Languages are the “key to unlock the world around us”, not just because they allow us to navigate foreign places and culture, but because they encode within them entire worldviews, as Fifty Sounds repeatedly proves.

This is a book for people in love with language, but not necessarily languages. Barton’s prose is electric with imagery, vibrant and captivating. Linguists, polyglots and TEFL teachers will doubtlessly get a kick out of this masterpiece, but the lessons it contains about life and language are applicable to all, and are presented in an imminently readable package to boot.

Polly Barton’s Fifty Sounds will be available from Fitzcarraldo Editions from the 14th of April. 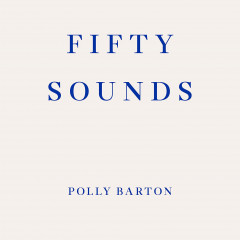 By turns an autobiography, travelogue and meditation on language, Polly Barton’s Fifty Sounds is an eclectic study on what it means to teach – and learn – a language, as told through fifty mimetic sounds.