After following astonishing breakout single 'Anthem to the Youth' with the anthemic 'Here We Go', Britain's next big band Adora sat down with Matteo Everett to discuss their musical influences, ambitions, and why fashion means so much to them

You’ve described yourself, quite poetically, as a band born ‘in a distant land kissed by the sun where mountains rose from the sea’. Is this sincere, or rock’n’roll overstatement? Many bands have benefitted from self-mythologising in the past…

Well, we quite literally are from a sunny island in the middle of the ocean (Canary Islands). But we wouldn’t necessarily want to make that the main thing about us.  It’s merely a fact which only when we came to the UK, did we realise was somewhat interesting. We never used to think that, but the fact that we had such a different upbringing, coming from such a unique place, really feeds into our creativity.

The two songs you’ve released so far, ‘Anthem To The Youth’ and ‘Here We Go’, showcase a wide range of musical influences and an ability to genre-bend and fuse different styles together. Do you think an eclectic musical style is important in the world of streaming, where all genres in the world are accessible to everybody at the touch of a finger?

Again, our upbringing and having moved countries, has really enabled us to learn about and explore a wide range of genres that we get to experiment with. We do think it is important, and almost freeing as an artist to explore different genres and sounds, without boundaries – which is becoming very apparent in the charts.

We do have a certain vibe or style, which is closely linked to our personal identities – which is why our music is always rock-infused. However, the fusion of all these other influences that we have, helps us spice things up.

In my review for ‘Anthem To The Youth’, I detected tones of Oasis, Queen, and the Bob Dylan/Willie Nile school of vocals, but there is clearly so much more going on in that ambitious song. Would you say you’ve got any major influences, or do you try to absorb a bit of everything you hear?

Queen is one of the first bands that inspired us musically and beyond. Especially in terms of genre-bending, theatricality and eccentric performance – things we love to incorporate into our music and live shows.

When it comes to Anthem to the Youth, you can definitely find a bit of Mark Knopfler’s (Dire Straits) call and response with the guitar, as well as Supertramp’s long keys intros. Some people say it reminds them of Bowie, which is another one of our major influences.

But yeah, we definitely aim to absorb anything that feels good to listen [to] for us - regardless of the genre.

Check out the music video for Adora's brand-new single, 'Here We Go'

Long-time established acts have really been struggling due to the restrictions on live music within the last year. I can only imagine that it’s even harder for a band beginning to break out during the pandemic, with a lack of traditional channels like open mics and local gigs to showcase your music. How has navigating the exclusively online world of music promotion been for you?

Our intention from the beginning was to start by strongly promoting our stuff online, to reach people that could really vibe with it. We also love photography and creative direction, so social media serves us as another creative outlet that is closely linked to our music. It allows us to visually represent our ideas and our music, so having time and reason to take part in that, has been quite good for us.

Thanks to this, we’ve been getting opportunities to play more gigs once things are fully back on, so we are extremely excited about our live shows.

Adora seems to be almost as much about fashion as the music itself. Your songs have referenced fashion styles, you’ve worked with Pretty Vacant and other fashion brands, and you run your own vintage shop. Can you tell me a bit more about the relationship you see between fashion and music, and why fashion means so much to you?

Thanks for this question! It’s very true that both Adora and our personal identities find fashion a key tool for self-expression. We love how a daring outfit can pull you out of your comfort zone, and in turn boost your confidence. We’ve slowly started to become quite comfortable with being the craziest or most eccentric dressed ones in the room.

And we think that this can not only add a lot to our visual concept, but also make us more confident performers.

You were the first artist to be signed up to up-and-coming label Metropolis Blue. Can you tell me a bit about how this came about, and what it’s like working with a small label that’s still in its infancy?

We were in contact with Metropolis Blue prior to releasing any music, and they gave us feedback and advice on our demos and how to push our music career forward. So we decided to release our first two singles with them. We’ve had a great team of very hard-working people alongside us, working on the release and constantly providing support on any matter, which has been great. They focus on developing artists and music industry professionals, rather than on financial gains. So we feel like it has been a great stepping-stone to begin with.

With the scope and ambition of your songs, music videos and messages, it seems like Adora are on the path to world domination! You’ve managed to build up an impressive fanbase over the last couple of lockdowns, and you’re rolling out singles at a high speed. Can your fans expect any bigger plans in the near future (an album? a tour when it’s safe to do so?)

We follow Oasis’ mantra from back in the day; “if you start a band and you don’t wanna be the Beatles, there’s no point starting a band”. We don’t fully agree with that statement, since it is great to just play music to get that natural creative rush; it’s the best part of it. But we are very ambitious indeed, and we aim to reach beyond how far our minds can go.

In the near future, you can expect loads of new music, gripping live shows, and the launch of our rebranded vintage shop, which will become our merch outlet for Adora.

You can listen to Adora's latest release, 'Here We Go', on Spotify 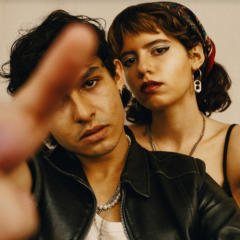 Adora Interview: "We're comfortable being the craziest dressed ones in the room"

After following astonishing breakout single 'Anthem to the Youth' with the anthemic 'Here We Go', Britain's next big band Adora sat down with Matteo Everett to discuss their musical influences, ambitions, and why fashion means so much to them