This is a review of the film Frozen 2 for my Bronze Arts Award.

The film, Frozen 2 was made in  2019 and Chris Buck and Jennifer Lee directed the film.The key actors are; Idina Menzel as Elsa, Kristen Bell as Anna, Jonathan Groff as Kristoff and Josh Gad as Olaf. The film is aimed for ages 8 and up.

Elsa has ice powers and is hearing a ringing in her ears and goes to find out where it is coming from and nearly dies in the process.This is the second film in the series-hence the name “Frozen 2”. My opinion of the film is that it is very funny and also has good songs,always an important quality.  My favourite song was “Into The Unknown”. I like singing this with my sister to annoy my brother! The film can, however, be sad at times and even slightly scary. When the stone giants were chasing Anna at the end it was quite scary.   This helps to keep the interest level high as it adds depth to the story. I think that it is quite long for me, 1¾ hours but for other people that may be a good time length. All in all it was a good film and I would go and see another Frozen sequel. 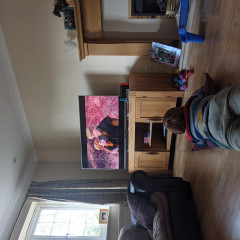 My Review of Frozen 2

This is a review of the film Frozen 2 for my Bronze Arts Award.