Working around current restrictions in relation to lockdown in the UK, we managed to view a livestream of Maggi Hambling's sculpture The Scallop at Aldeburgh beach. Here is my review of that event.

On a cold and windy January, I was propelled into a virtual encounter at Aldeburgh beach to see Maggi Hambling's historic sculpture: The Scallop. Originally a piece in commemoration of Benjamin Britten, his work and inspiration, The Scallop has obtained a controversial reputation and divided opinions for almost 20 years.

Located about 30 steps away from the water's edge, the sculpture is an immediate focus point for locals and tourists alike. Its vivid and massive design draws you away from the surrounding sand and marshlands and almost invites you to reach towards it. I can understand from the perspective of a local as to why it may be considered a 'ruining' of the beach, it really does distract your attention, but as with any work of art, perhaps this is intentional? My interpretation is that The Scallop was created as a place to find peace and rest. The interactive elements create a human-like comfort for visitors. I can relate to the coast being a source to go to for a peace of mind. The Scallop being what it is also produces this aspect that it IS the sea itself, a shell being something know throughout the years to echo the sound of it's howls and crashing waves. This thought is continued in the design element of The Scallop, how it is crafted together. The smooth ridges again repeat and reflect this image of the sea and it's waves. To me, the sea can be seen as a 'free' system and in connecting to the sculpture it lingers on this idea of 'freedom'. The quote around the rim of The Scallop reads: "I hear those voices that will not be drowned". Although it sounds morbid, to me these words appear beautiful and promising. Personally I find it powerful and moving, it motivates me to move forwards in my beliefs with the knowledge that my voice is heard. The quote greatly signifies the work of Britten, taken from his Opera 'Peter Grimes'. This is the tragic story of a local fisherman, which is demonstrated in the delicate and fragile appearance of the sculpture, as if it could fall to pieces. This side to it contrasts against its giant structure, representing a strength within this sentimental story.

Having highlighted these points which I found positive to me personally, I must also admit that my intial reaction differs greatly. I was taken aback by its unnatural appearance and considered it might work best being more subtle. Although The Scallop is said to feel smooth at the touch of a hand, I couldn't help noticing how it's edges are a lot more violent in their design. These sharp edges almost scare you away from it and make it less effective as an attraction. The location for the sculpture, although important and necessary, might have had a better reception if placed down near Snape Maltings Concert Hall. It is known that those behind the physical creation of the piece are proud to have played a part however it's worth noting that maybe £75,000 of donations could have been put to a better use.

Overall I found The Scallop an effective piece of artwork as it entices viewers to come close and touch it, and through this physical bond it helps you consider the effect and powers of the sea. It does not take away the calm atmosphere that being on a beach provides. It's design reminds me of a blossoming flower or a peacock's display of feathers and, I hope, provokes viewers to be more open with themselves in a similar, beautiful way. Once graffitied and called a 'rubbish tin can', it is clear that these opinions will not outway the charm of the piece, being the winner of a Marsh Award in 2006. I strongly encourage others to delve into the depths of The Scallop before they are drowned by the controversial opinions surrounding it. 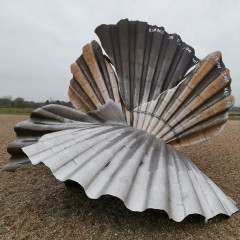 Working around current restrictions in relation to lockdown in the UK, we managed to view a livestream of Maggi Hambling's sculpture The Scallop at Aldeburgh beach. Here is my review of that event.