For my Bronze Arts Award i've been asked to post a Disney film review on Voice.

The movie is about Mal, Evie, Carlos, Jay, Ben, Audrey, Uma, Harry and Gil (umas sidekick). Mal, Evie, Carlos and Jay go to the isle of the lost to get 4 kids that they choose to bring to Auradon. After they take the kids to Auradon they all try to stop evil Audery. Audrey becomes evil because she steals Maleficent's scepter because she is angry with Mal for marrying Ben. She wanted to be queen so she is now an evil queen because she stole the scepter and then she became bad. Audreys power is to send people to sleep by sending pink smoke over them and by turning them to stone. When they are trying to stop Audrey Jane's 14th birthday party is going on at the enchanted lake and Jane is waiting for Carlos, Mal, Evie and Jay to get to her party. But Jane gets an unexpected visitor called evil Audrey and puts everyone to sleep and she still sings happy birthday. Chad who loves  Audrey is her side kick. Audrey went to the castle and into Ben's office where he was getting ready to go to Jane's birthday party. Ben asked Audery “why are you like this” and Audery said that she was the evil queen of Auradon. Audrey then put a spell on Ben turning him into a beast. Jane from her birthday party brought some enchanted lake water and sprayed it at Ben then he turned back to himself (except for the fangs). Mal and the others bring Audrey back to herself and Auradon to safety. 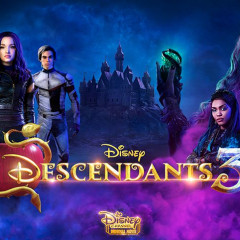 For my Bronze Arts Award i've been asked to post a Disney film review on Voice.