A mother tells her experience of the 80s to her children

For My Girls ‘83 is an audio piece that embeds itself in the 80s from the start with some brilliant and immediately evocative music (composed by 80s Stallone).This piece isn’t all denim jackets and Madonna, it delves deep into the downsides of the 80s as well. It’s the story of a woman being ostracised by her family because she fell for a Black man and got pregnant. As Helen Simon delivers this story, her voice constantly communicates the emotional weight of each part of it, whilst still managing to keep a tenderness throughout which is really touching, and allows for it to resonate emotionally with the listener.

My biggest issue with this piece is the perspective that it chooses. It wants to discuss racism and does it through the lens of a white person who is affected by racism in a real way, but is more collateral damage than the direct target. The ‘tall, dark and handsome’ Jamaican man is never really characterised as more than that, and while her children are given more of an identity than him, they are still never given a voice.

Because of this refusal to directly centre a non-white voice in a story that’s about racism, the direct subjects of said racism feel more like abstract notions than people. So the messages about choosing love and self-empowerment ring hollow, because while the perspective of the mother at the centre of this story is important and powerful, the only perspective we’re given on racism is from someone who does not experience it directly.

For My Girls ‘83 tries to tell an impactful story about a particular time, but its narrow perspective means its ultimate message rings hollow. 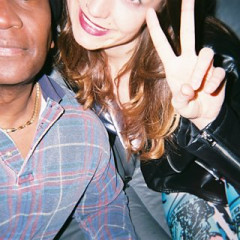 A mother tells her experience of the 80s to her children