1917 follows the tale of two young men in the First World War who have to cross dangerous terrain deliver a crucial message to the front lines.

This is a film that lives and dies by its spectacle. Whilst Blake (Dean Charles Chapman) and Schofield (George Mackay) are at the centre of the film, the focus is less on them and more on the incredibly crafted reproduction of World War I that takes place around them. Roger Deakins’ cinematography manages to invoke awe out of a grim landscape, and he creates incredible tension with some of the shots he employs, deftly moving between claustrophobia and chaos. The production design here is also phenomenal, with a few great instances of storytelling using items in the background. Perhaps the most exceptional examples of this are the sequences at night, where Deakins’ camerawork creates scenes that are both beautiful and terrifying — with a potential threat around every corner. All of this is carried along by a phenomenal Thomas Newman score.

Given how great the camera work can be, it’s a shame that from a cinematographic perspective 1917’s main selling point of being filmed to look like it’s all one shot felt like a gimmick. Whilst it was very effective for some scenes, it never feels like the technique is actually communicating anything about the film beyond giving justification for yet another film about a  World War to be an Oscar contender.

However, while I can mostly overlook the gimmicky shooting, this film really falls flat for me with the characters and script. Whilst Chapman and Mackay give pretty decent performances with the material they’re given, their characters easily fit into the mould of characters seen in British war media for the last century (even down to their accents). The same goes for pretty much every other character they come across - though the inclusion of soldiers from the colonies was a welcome break from the norm.

Characters aside, 1917 moves from trope to trope, ex machina to ex machina, very much pushing your suspension of disbelief and hoping you’ll be distracted by the aesthetic and spectacle. Even the dialogue itself feels like it’s out of a first draft at points, or copied out of the most generic film/TV show/audiobook/play/novel about The Great War. Crucially the film has nothing to say about war, barring the incredibly overwrought ‘war is hell’, ultimately feeling aimless and hollow.

1917 is full of phenomenal spectacle and craft, which lacks the soul and focus to make it a truly great film, but is incredible enough that this still feels like a worthwhile journey. 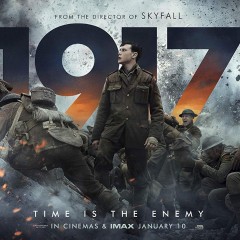