Edred, the Vampyre throws us into the world of a thousand-year-old vampire who slept with Shakespeare but never bit him.

In Edred, the Vampyre, two wannabe vampire hunters just out of sixth form come across Edred, a millenia-old vampire who loves daylight and garlic, and tells an alternative history of vampires.

This play is consistently witty, providing funny and small alterations to world history – like how Edred actually altered Shakespeare’s Macbeth to include all the lines mentioning blood. David Pinner’s script is especially effective at playing with expectations surrounding vampires and subverting them in funny and dramatic ways. Through all of these jokes, it is very clear that Edred is (to quote the play) ‘not a very PC vampire’, with the play repeatedly straddling the line of offensiveness in a way that’s mostly successful. One major problem with this script is that its obsessive focus on Edred means that the other characters aren’t especially deep or interesting, and the actors have very little to work with.

The standout performance in the show comes from Martin Prest as the eponymous Edred. Whilst Edred is literally enchanting the vampire hunters, Prest enchants the audience with his incredible performance, gliding around the stage and deftly switching between high camp and genuine menace. By contrast, Zari Lewis (as Elizabeth) and James Hoyles (as Jacques) feel a little underwhelming, never really having the same command of the stage that Prest does. Both performances feel a little too flat. Hoyles only really demonstrates two emotions, anger or skepticism, throughout the duration of the show. Lewis does have a few moments where she does some interesting acting, but she and Hoyle feel stuck in the shadow of Prest.

Despite being funny, there is definitely a serious amount of horror throughout the production. Prest manages to be genuinely scary at points, something helped along by Chuma Emembolu’ intense sound and lighting design. There are also incredibly vivid and harrowing descriptions of intense body horror.

Edred, the Vampyre is by no means perfect, but a magnificent performance from Priest and a witty script make it well worth your time (and blood). 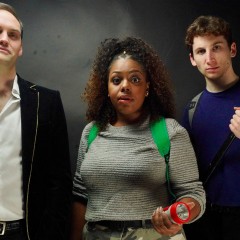 Edred, the Vampyre throws us into the world of a thousand-year-old vampire who slept with Shakespeare but never bit him.