Shit, a performance created by MILKE and Dee & Cornelius, tells the story of Billy, Bobby and Sam. This production examines misogyny in a heartbreaking and provocative way.

Shit, a performance created by MILKE and Dee & Cornelius, tells the story of Billy (Nicci Wilks), Bobby (Sarah Ward) and Sam (Peta Brady). This production examines misogyny in a heartbreaking and provocative way. Shit is a performance where the trio are foul-mouthed, pessimistic and powerless as they struggle to believing that both they as individuals, or their lives are anything to be celebrated.

All three protagonists; Billy, Bobby and Sam, have pasts that are equally as traumatic as the others. They tackle issues such as being in an abusive foster care situation and improper parenting. The staging is just as bleak as the subject matter. The set consists of a dull grey wall with quadrilateral shaped gaps which double up as both windows and prison cells.

On paper, this performance should be depressing and dull, though the writing is powerful and hard-hitting, undoubtedly why the play is award winning. The show takes stereotypical femininity and spins it on its head. The female trio are terrifying, yet exhilarating and it is refreshing to see women portrayed in this way. They spit, swear and scream and are miles away from the conventionalised way women have been portrayed in the media so very many times before and only occasionally do we see glimpses of their vulnerability.

The three actors are strong, skilled performers, all reaching deep to bring something raw and electrifying to the stage. Shit is being performed at the Main Hall at the Summerhall venue and is one to watch for something different. 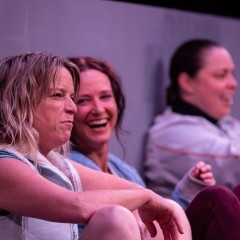 Shit, a performance created by MILKE and Dee & Cornelius, tells the story of Billy, Bobby and Sam. This production examines misogyny in a heartbreaking and provocative way.