Tokyo Rose brings a crucial story to a new audience.

Tokyo Rose is a musical that takes on the case of Iva Toguri, a Japanese-American woman accused of peddling Axis propaganda.

The story of Iva Toguri isn’t especially well known in the UK, but Tokyo Rose does a fantastic job at displaying it, mirroring her life story with the court proceedings of the case against her. Something that really works about this show is how current and relevant the story feels to the present day. Particular emphasis is placed on the ways in which for those seen as ‘other’, their citizenship and humanity are entirely conditional, in spite of where they were born and what nation they swear allegiance to. Whilst this musical focuses on the USA, you can also see this in Britain, with the way in which a program like Prevent arguably veers into making all Muslims terrorism suspects. There’s also a tight focus on the pretty common experience of how immigrants (like myself) are often considered alien in both the nation we were born and raised in and the nation our parents grew up in. All of the writing around these themes feels genuine in a way that really works well.

From start to finish, all of the show’s performers are incredible. Both their singing and acting are consistently fantastic throughout the show, succeeding in both the bigger musical moments and the tender quiet moments. In the performance I was at there were a slew of technical issues, from mics not working to speakers blowing, and they still persisted. In fact, their voices were powerful enough that you could hear them all without amplification, especially Lucy Park and Maya Britto. Whilst there were issues, the lighting was incredibly visually striking, and the music was amazing. Also, the dance routines throughout the show were fluid and incredibly entertaining, whilst still communicating the emotions and message of the scenes. 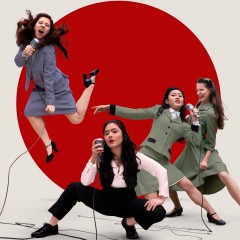 Tokyo Rose brings a crucial story to a new audience.