Voice MagReviewsIn the Shadow of the…

In the Shadow of the Black Dog takes on the ties between mental health and masculinity.

In The Shadow of the Black Dog is Daniel Hallissey’s solo theatre show focusing on one man’s struggle with mental health as his life shifts around him.

For the duration of this show, Daniel Hallissey is the sole occupant of the stage, yet he manages to fill the space reasonably effectively and energetically. As Alquist, the everyman/manchild who is the focus of the show, Hallissey is generally pretty funny and entertaining to watch. He manages to be childish enough to convey character, but not so much that the show becomes infuriating and unwatchable. When he moves into the more emotional moments he’s also reasonably good, with a few standout emotionally impactful moments, particularly a monologue towards the end.

In The Shadow of the Black Dog’s main issue is how by-the-numbers it feels. The general structure of the show is something I feel like I’ve seen so many times before. Media that focuses on manchildren having to grow up, often after hurting the women around them, is a dime a dozen. A lot of the emotional beats of the show feel like predictable things I’ve seen before elsewhere, with some even falling deeply into cliche. Now, this isn’t to say that the emotional beats don’t work, but there’s just not much about them that is unique to this show. Even its central message about how men need to be more open and vulnerable feels cliche and broad, in spite of its obvious importance.

With suicide being the biggest killer of men under 50, In the Shadow of the Black Dog is clearly an important show, even if it isn’t particularly unique. 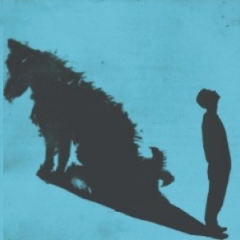 In the Shadow of the Black Dog

In the Shadow of the Black Dog takes on the ties between mental health and masculinity.