Footnotes is quirky, ridiculous and fantastic. He interacts with audience members throughout and even manages to hand out chamomile tea.

After watching Lewys Holt’s Phrases the previous day, I was more than looking forward to seeing the second performance he’s bringing to the Fringe this year, Footnotes, a parody of an academic lecture. Footnotes is less of a dance piece and more of a hilarious skit. Similarly to Phrases, the performance begins the moment you enter the space, with Holt taking on the role of a straight talking lecturer. There are empty graphs waiting for you in your seat, that he encourages you to fill in, in any way you feel. As the performance continues, he begins to read out his lecture which is packed full of jargon and intellectual nonsense and as the title of the performance suggests, there are plenty of footnotes. These footnotes start off being fairly simple, though eventually progress into constant, crazy interruptions.

Holt is a creative genius who certainly knows how to engage an audience and works through slight technical hitches with ease. Footnotes is quirky, ridiculous and fantastic. He interacts with audience members throughout and even manages to hand out chamomile tea. He flirts, dances, twitches and overshares and as the performance progresses, he becomes sort of a split personality. He remains the ordinary lecturer during the main body of the reading, though transforms into a comical and crazy version of himself as his own thoughts and desires interrupt the lecture in the form of footnotes.

Like a TED talk gone awol, Holt’s semi-improvised show is sure to entertain. Footnotes is definitely one to see and can be found in the Anatomy Lecture Theatre at Summerhall, alongside his other show, ‘Phrases’. 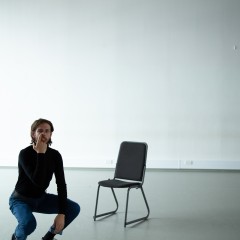 Footnotes is quirky, ridiculous and fantastic. He interacts with audience members throughout and even manages to hand out chamomile tea.