Passengers is a beautifully directed dark comedy about mental health and the battles within the mind. The educational values and relevance of this performance in today’s society is incredibly high.

Passengers is a beautifully directed dark comedy about mental health and the battles within the mind. Though the main character, Max, never appears on stage, this production uses a concept similar to that of the Disney film ‘Inside Out’. The ensemble theatre represent the three voices inside Max’s head and narrate Max’s story as he struggles to figure out who he is; a savage, a peacekeeper or a critic.

The three personalities within Max’s head work with huge physicality in the small space as they clash and argue to take main control of Max’s choices and views. The set of Passengers is hugely symbolic as the ensemble characters are trapped within metal scaffolding, resembling a jail. All throughout the performance the three actors swing, climb, lay and hang on the scaffolding with ease.

Passengers shows an innovative concept in the showcasing of mental health and explains Dissociative Identity Disorder in a much more human and understandable way. Laced with dark humour and relatable circumstances, the play is both educational and exceptionally relevant.

The music is high energy and high impact, perfectly suiting the dark comedy with rock and alternative tracks throughout the performance. The ensemble wear 80’s inspired shell suits and the whole production gives off an industrial, old school kind of feel.

Passengers is impactful and conveys an incredibly important story that should be shown everywhere. The educational values and relevance of this performance in today’s society is incredibly high. A clever and brilliant performance. 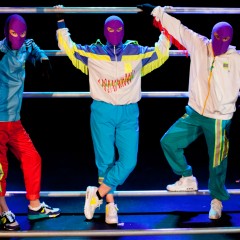 Passengers is a beautifully directed dark comedy about mental health and the battles within the mind. The educational values and relevance of this performance in today’s society is incredibly high.