Ali and Alpo is a collaboration between Finnish dancer and choreographer Alpo Aaltokoski and Iraqi oud lute musician Ali Alawad.

Ali and Alpo is a collaboration between Finnish dancer and choreographer Alpo Aaltokoski and Iraqi oud lute musician Ali Alawad. This piece explores the similarities and differences between the two cultures. Musician, Ali Alawad, is projected onto a screen on the right half of the stage and Aaltokoski dances across the stage, often dancing behind the projection giving a kind of unity to the two performers.

There is a wordless dialogue between the two artists as Aaltokoski dances in response to Alawad’s music. His movement has an improvisatory feel to it, with a large emphasis on turns and spirals. A particularly hard hitting moment is when he performs fast movement appearing to suggest the running and not getting anywhere. This statement is especially relevant due to the history of this piece. Two weeks before the two were supposed to premier this piece, Alawad’s asylum application was rejected, causing him to flee the country. Thus, he performed via video in the performance, exactly as we witnessed today. This knowledge brings out a new meaning to the piece and questions restrictive government asylum policies and draws a focus to the harmony of the two contrasting cultures.

Though the piece was touching, I struggled to find meaning behind some of the movement and parts of the performance began to  feel quite repetitive. I think the overall performance, including the lighting choices, requires some further refinement to truly fine-tune the intentions behind the piece in order for it to become fully polished. 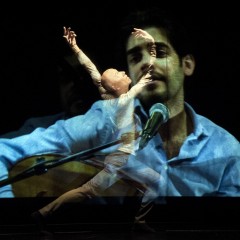 Ali and Alpo is a collaboration between Finnish dancer and choreographer Alpo Aaltokoski and Iraqi oud lute musician Ali Alawad.