This is physical theatre at its best.  Fantastic atmosphere, and well executed slapstick comedy.

You enter a large space filled with smoke. Large objects covered in old white sheets. A dark scene is set by the lighting, eeriness of the stage and a fantastic soundscape.

The actors come on stage to start. They begin creating the ‘warehouse’ feel by revealing the contraptions hidden beneath the sheets. They have wonderful comedy timing with all of their actions, moving many objects around with purpose and you can’t help but be entrances by what’s going on. They seem to be creating some sort of manufacturing process, with large physical gestures and movements. Their grunts and minimal lines throughout the show give just enough away to understand their intention, helped by big facial expressions.

They use the technique of repeating their scenes, get an audio signal which brings them in to another set of movements, and then back again. Changing on the 3rd time, building on and developing their story.

The action varies, each character portrays their role in the story and you understand the position each takes in this small group as the show develops.  They make catching flying objects fun, they deliver ‘classic clowning’ in a somewhat evil but enjoyable way, and even make you laugh when simply eating a tart.

The lighting and sound is used to great effect throughout, the physical action has to be timed perfectly with the score and it is delivered really well; seemingly when a slip-up happened they still managed to reset and deliver physical comedy with audio accompaniment - meaning some great techs behind the scenes for sure.

The set was inventive; with the actors themselves morphing it’s elements in to new contraptions to use, with some costume changes and use of props making for a great show. The effects are plenty, the audience are directly engaged (even harangued), and there’s dark comedy around every twist in the story. I’d love to repeat some of the strong moments but I don’t want to ruin the show.

The only detraction is that it felt like the show could have finished at around the 45min mark. There was plenty of really great work that came after this point, but there was a small sense of repetition - delivered in a new way, but a similar concept regardless.  Having said this, when the show did come to the end there was whooping from the gathered crowd and audience members saying ‘that was great’ as they left.

The show might have a slightly more ‘niche’ taste and is for the discerning theatre goer, but it certainly deserves to be packing out the venue. If you’re in to comedic physical theatre and have an appreciation for clowning and stage craft, then this is a must see in Edinburgh. 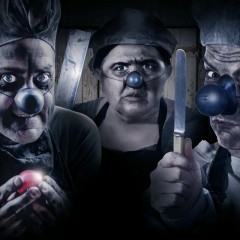 This is physical theatre at its best.  Fantastic atmosphere, and well executed slapstick comedy.