A ‘Raconteur’ is someone 'who tells anecdotes in a skilful and amusing way’. This is totally true of Chris in this hour of musings, largely about his mooching (in this case meaning 'loitering around shops in a listless manner').

If you want to hear amusing stories about crisps and chocolate instead of hard hitting comedy that aims to make a statement or utilise the soap box given to a comedian then Chris is your man. After a decade as a postman and currently planning a wedding, the hour retells stories of the past year. There’s a few ‘living the dream’ type stories that signify his success as a comic, but everything is very relatable. The comedy is human. Whatever ‘class’ or background you might be from Chris is a down to earth chap you can enjoy a chilled out time with.

There is a simple use of some props, but there’s no big stage effects or attempts at stunning you. It feels more like being around a campfire with him regaling stories - especially in the heat of a sold-out shipping container. He even accepts and deals with late-comers disrupting the flow on three occasions! For such an intimate gig this could really throw someone off their game, but whilst Chris is clearly well prepared with a story arc its clear he can go with the flow and is professional enough to just pick-up where he left off and even engage with them for some off-hand comedy.

A talented story-teller, this isn’t one that creates any raucously hilarious moments, but keeps you laughing out loud throughout. You don’t have to think about the comedy, you don’t have to face a torrent of opinion, and you can really relax for an hour of light comedy. So join him when you can.

Pleasance Courtyard every day at 8.15pm, tickets at: https://tickets.edfringe.com/whats-on/chris-washington-raconteur 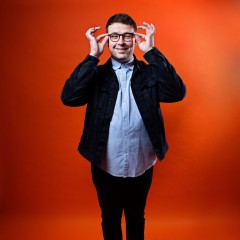 A ‘Raconteur’ is someone 'who tells anecdotes in a skilful and amusing way’. This is totally true of Chris in this hour of musings, largely about his mooching (in this case meaning 'loitering around shops in a listless manner').