Cheesy, self-pitying and butt-clenchingly embarrassing, Rocketman falls short of the Oscar award winner it could have been.

The long-awaited Elton John biopic has finally danced onto our screens in all its glittery, misjudged and pompous glamour. It barely takes five minutes of this thoroughly erratic musical to feel Elton’s producer credit looming dangerously over the script.

For two hours we enter a world where people share long, lingering looks when a new melody is introduced, where nasty characters are thoroughly evil, and wistful looks to camera dramatically lack Fleabag’s comedic success.

Elton John’s (Taron Edgerton) rags to riches story is truly compelling; here is a boy who grew up in a working-class neighbourhood, played his way into the Royal Academy of Music against all odds and made millions from producing music around the world. Throw in his forbidden sexuality, an evil parent (or two) and Elton John’s life is absolutely worthy of the big screen.

However, perhaps the biggest lesson we can gain from Rocketman is that biopics should only be produced once the subject of the film has passed on. At multiple times in the film, real-life Elton’s chunky 5-inch boots can be felt making an intrusive stamp all over what could have been an authentic, multilayered glimpse at the characters who shaped his career. Instead, we witness the life of a man who is flawed, but the people around him are worse, in fact, utterly wicked and wholly undeserving of sharing in his fame.

Nowhere is this evidenced more bluntly than in the presentation of his parents. His mother, (Bryce Dallas Howard) notably played with a haphazard English accent, closely resembles Snow White’s hideous stepmother. However neglectful and self-absorbed Elton’s real mother may have been, director Dexter Fletcher fails to touch on an authentic portrayal of the neglect for her child. What is presented on screen is an incredibly one-dimensional snapshot of this woman, disappointing for a film that could have explored this relationship with much greater nuance, especially considering its 15 rating.

The exploration of his father (Steven Mackintosh), whilst not quite as cartoon-like as his mother, demonstrates Fletcher’s attempts at filling out this pivotal influence on Elton’s decisions in a genuinely heartbreaking moment. Elton returns to his father, hoping to rekindle a relationship that never showed spark. Mackintosh remains fierce, stern, and lacking in shame, prompting what is perhaps Taron Edgerton’s finest acting throughout the film.

Oh yes, if you haven’t heard by now, Taron Edgerton’s performance is the definition of incredible. Here he steers clear of an impersonation of the iconic rockstar and navigates an intricate interpretation of a man who never fully recovered from the mistreatment of his parents yet is determined to live the rest of his life on his own terms.

Edgerton is complimented by a couple of the only sympathetic depictions of real-life characters, his kind-hearted Nan (Gemma Jones), the first person to support Elton’s pursuit into music and Bernie Taupin (Jamie Bell), his lifelong writing partner. Both performances are brimming with warmth and genuine charm, but their arcs are totally underserved by the script. Nan’s profound presence is given a mere gesture in an incredibly lazy montage sequence, a scene that resembles a low budget realisation scene from a 90s romcom. Meanwhile, Bell’s Bernie remains Elton’s only constant and supportive companion, but is denied a well-deserved apology right until the credits roll.

The musical framework of this biopic is ultimately what provides the biggest dent in the film’s success, but whether you like it or not, Rocketman is unashamedly Elton. 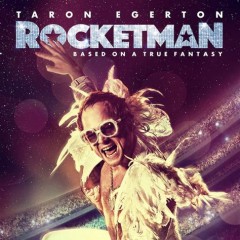 Cheesy, self-pitying and butt-clenchingly embarrassing, Rocketman falls short of the Oscar award winner it could have been.