At the height of the pandemic, approximately 34 million people tuned into Netflix’ unbelievable documentary series Tiger King. Eccentric big cat owner Joe Exotic and his bizarre back catalogue of country songs hooked audiences from around the globe. Throughout six episodes Tiger King plunged viewers into a world of enormous animals, a three-way marriage and Joe Exotic’s fascinating rivalry with animal activist Carole Baskin. This unavoidable show was popping with conspiracy theories, unsolved mysteries and ugly amounts of ego.

The clock strikes four, and the theme from the Good, the Bad and the Ugly rings throughout Barry Zoo, Wales. The iconic whistle from the Western classic drifts on the breeze, followed by the sounds of a harmonica. Fourteen-year-old Cavan Sullivan steps into a ring of nervous-looking families. He is holding a seven-foot-long Boa Constrictor.

“Back then nobody saw reptiles, they weren’t about.” Cavan chuckles over a patchy phone signal from his home during lockdown. Over fifty years have passed since he had this wild job, but he remembers his bizarre stint at the zoo with great fondness.

“I had a five minute [safety] briefing then I took the alligator out every tea time! It was blinking brilliant.” His rich Welsh accent takes on a tone of disbelief, “You wouldn’t get away with that anymore!”

Alligators on leads were not the only event health and safety inspectors would turn their noses up at today.

“They had the monkey who smoked down there, which obviously you couldn’t do now.” A laugh splutters from Cavan’s mouth, “I remember George and Hugh sitting on the front of their bungalow with Melody the monkey. George had a few puffs, passed it along to Hugh, who had a puff then the monkey put her hand out and she had a few puffs and they’d pass it back!”

The ringmasters at the centre of Barry Zoo were George and Hugh Palmer, twins who later married twins. During the Second World War, the pair were conscientious objectors and served in the Home Guard. George was even given recognition for being a dispatch rider throughout this dark time.

After the war the brothers set up a kennel and cattery. Looking after pets came naturally to them, but the transition from small animal shelter to zoo happened almost by accident. It all started when a friend who worked at a local circus asked for a favour.

One of the circus’ monkeys was playing up; pulling women’s long hair and generally being a nuisance. The monkey needed a new home.

George and Hugh gladly took them in and named her Melody. She spent the early years of her life in a cage at the front of the kennels and cattery for all to see. Passers by stopped their cars and got out to look at this unusual sight. Slowly a seed was planted in the twins minds.

Talk of the town

The pair began travelling all over Britain to collect weird and wonderful animals, before eventually breeding their own. One lion cub was allegedly adopted by their pet labrador. George and Hugh were learning on the job, but their affinity with animals was unteachable. 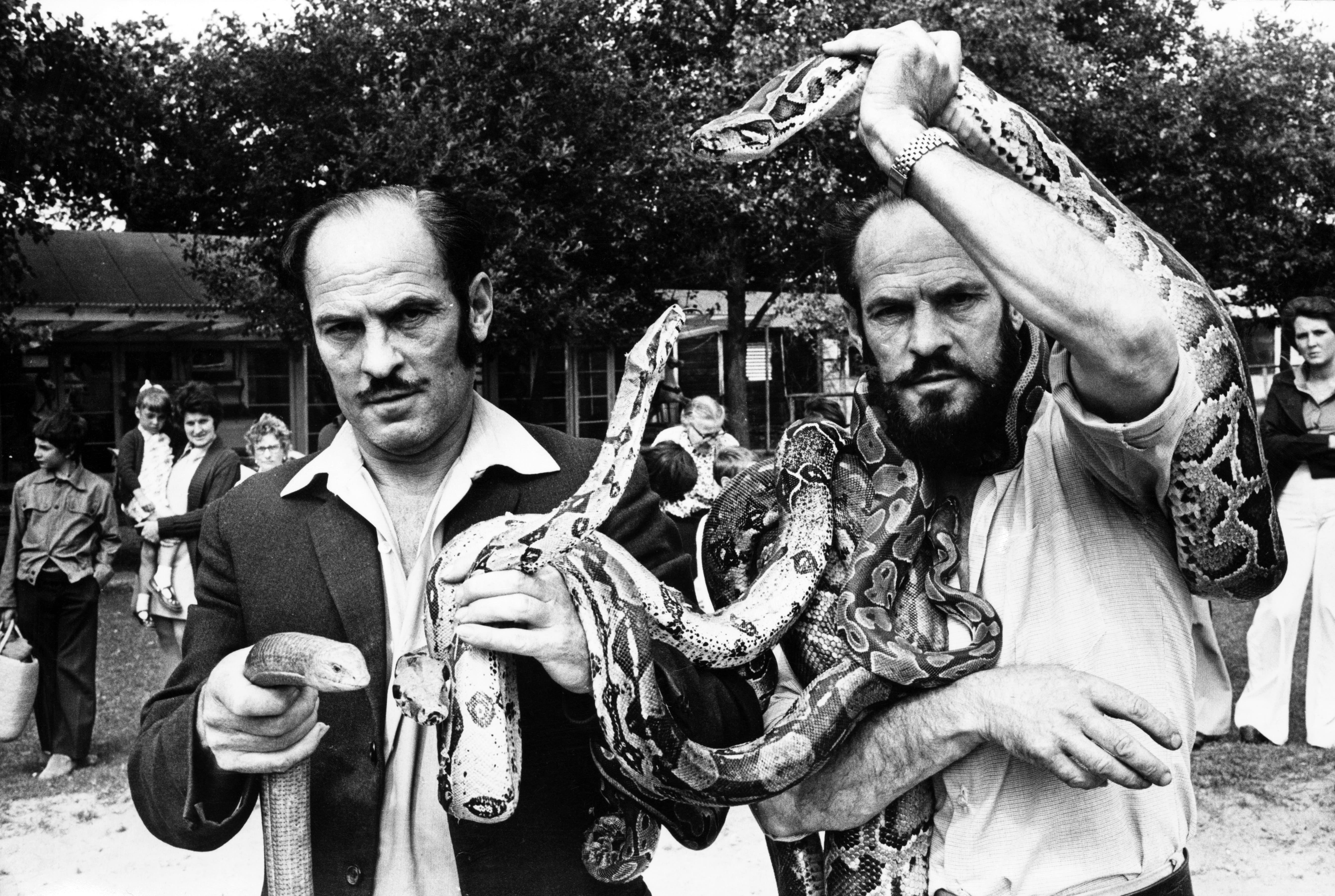 When the zoo finally opened in 1960, George and Hugh became local legends. Wales' first zoo boasted bears, lions, tigers and even an elephant, which meant that bank holidays were packed with curious Welsh folk eager to get their first glimpse of these strange creatures.

“We had coach loads of school pupils from Barry, Pontypridd and the Valleys visiting us. On many occasions the road would have to be closed because there was so much traffic."

As the zoo expanded, inevitably there were some critics. The pair regularly got into some hairy moments with the creatures that might have deterred others, but Cavan insists the twins were fiercely loyal to their animals.

“That’s what George would do. He’d risk his life at any point; he was never scared of anything. Animals always came first, but a lot of people didn’t see that. They just saw little cages and small enclosures but they just couldn’t get any help towards money.”

74-year-old ‘Larry from Barry’ is equally protective of the twins, “They were what we call eccentric. Like me!” Lawrence Hill worked as a self-employed painter for Barry Zoo, and was a long serving friend to the twins until George’s death in 2018.

His voice is ecstatic as he describes George’s entrepreneurial spirit when a local TV station asked to film him in a cage with the leopard, “George thought it would be good advertising for the zoo”. With the cameras rolling, George tentatively entered the cage. Hugh was just a step behind him, poised with a loaded shotgun.

“The leopard tore the shirt off his back! There was blood.”

“He came out and the camera man said, ‘Well George, I’m sorry to say this, but would you go back in and do it again? I ran out of film.’ And he was mad enough, too! He put another shirt on and went back in.”

Wales may be home to some of Britain’s most beautiful wildlife, but mountain lions certainly don’t come with the terrain. Larry is howling with laughter as he recalls the day that George took the lion out into Barry for a walk, “When he was on his way back an articulated lorry driver saw the lion and drove the vehicle off the road into the hedge!” Larry’s pitch rises, in hysterics, “What kind of a story is that?”

Despite a packed car park on the weekends, both former employees remember the precarious financial position of the zoo. With little support from the local council, it was an expensive operation to maintain. “They did it all of their own volition. They used to go round selling dog food to fund buying food for their own animals.” Larry sighs.

Cavan found other ways to make money. “I used to sell the elephant poo as well.” Local gardeners would use the manure as fertiliser. “I’d sit on this massive mound of poo at lunchtime and eat my sandwiches.” On returning home, his mother was not impressed. “Mum used to make me get undressed down to my underpants in the street before I was allowed in because I smelt so bad.” Try having one bath a week, Joe Exotic.

But one bizarre day in 1977 puts the modern-day antics of Joe Exotic to shame. 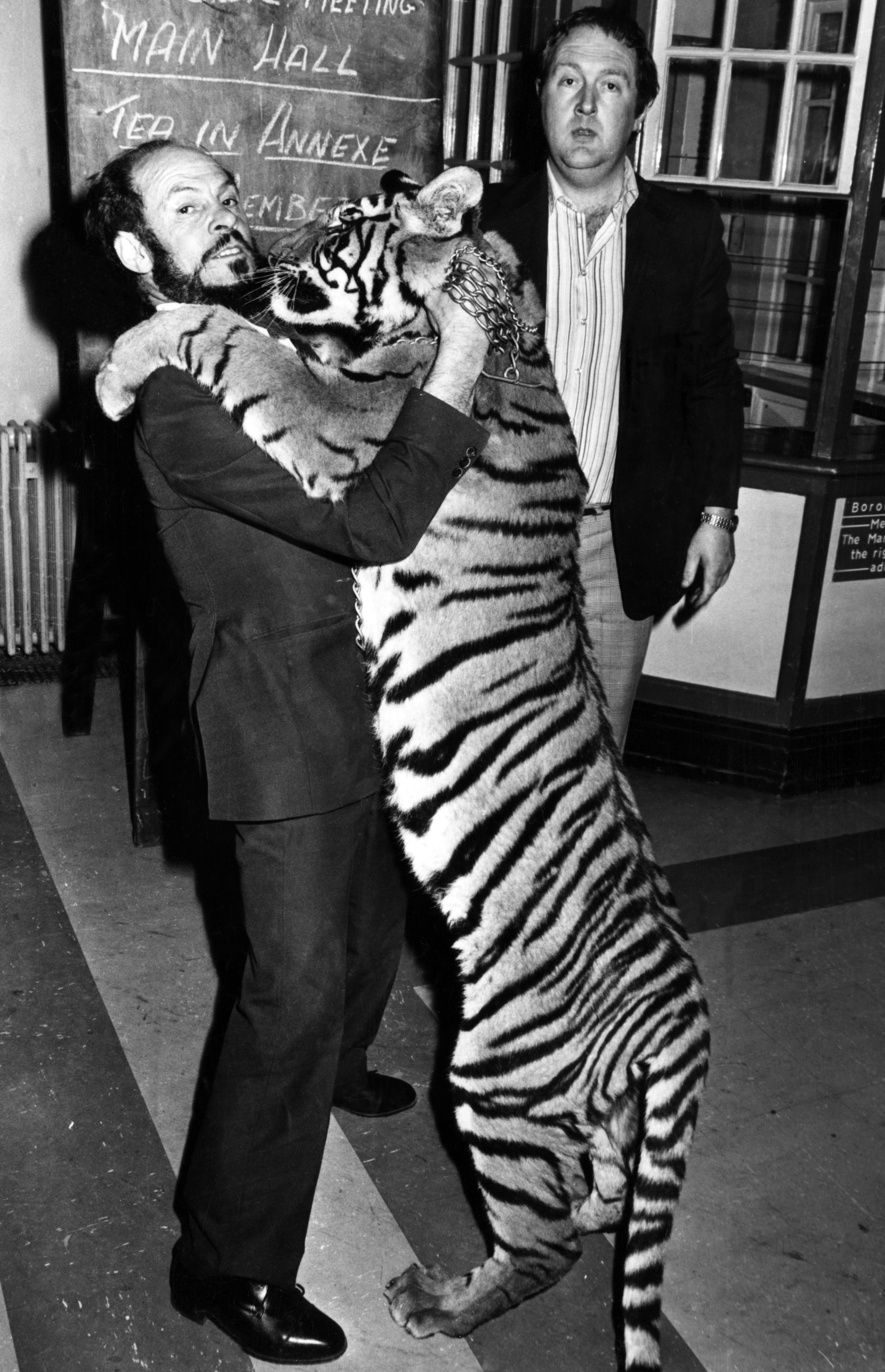 In protest of the council’s decision to decline planning permission to the zoo for the building of a new sign, George decided to take matters into his own hands.

The bright May sun shone onto Barry’s Old Memorial Hall or ‘The Memo’ to the locals. Inside, a group of councillors were sitting down for a meeting when a security guard was faced with a peculiar sight. Dressed in freshly polished black shoes and a modest suit, George Palmer walked up to the doors of the Hall. The delicate chink, chink of a metal chain accompanied the zoo owner. By his side was a fully grown tiger.

“You can’t bring that tiger in here!” Cavan recalls the local tale, emphasising his Welsh accent to mimic the shock of the security guard.

“Are you going to stop me?”

The police swiftly arrived to arrest George, fining him £20 for the ordeal. The new sign was never permitted.

Over the next three years, the zoo faced increasing financial pressure, and by 1980 the twins handed over the keys to the zoo. They found new homes for most of the animals and returned to running the kennels and cattery. Of course their new venture wasn’t without its antics. They made their money breeding German shepherds, who Larry suggests were some of the biggest in the country and could perform impressive tricks.

They also couldn’t stay away from exotic animals for too long, and soon after they bought three Rhea birds, distant relatives of ostriches and emus, for £90.

In its place today sits the Welsh Hawking Centre, a tourist attraction which is home to 200 birds of prey. “It’s not London Zoo,” comments one visitor on TripAdvisor, “it's a small family run facility so appreciate the time and effort that is put in to care for the birds.”

Cavan has even returned with his business to install double glazing to the same site he worked on over 40 years ago. His peculiar Saturdays at Barry Zoo were evidently transformative, “It was just brilliant. You couldn’t whistle at a better job.”

The Palmer estate was approached for comment but declined to be interviewed.

Tayo spoke to Maddie about the process of discovering this bizarre tale, and you can listen to it on the Voice Extra Podcast. 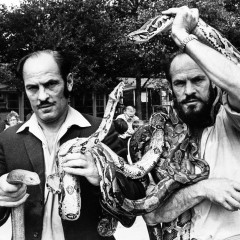 The Tiger King of Wales