EUAN is fringe theatre to a T.

This whacky three-hander is oozing with young acting talent, but lacking in a clear narrative structure. In true fringe style, what this performance needs is guidance from a well-versed playwright and a lick of paint, then perhaps we can reconsider the fifth star.

The story begins with a simple question, where is EUAN? As the narrative develops, the answer to this question is painstakingly revealed, yet even further questions arise through a series of misunderstandings between our three mysterious characters X (George Bailey), Y (George Craig) and Z (Hal Darling).

Ultimately the audience is left more clueless than when they started. At points this secrecy creates great moments of humour, however, overall it is unnecessary as fundamental aspects of the world these characters operate in are left to the imagination.

The reveal of EUAN’s ultimate fate lacks the necessary impact; we are unsure who the characters are or where they are in the first place. Think Waiting for Godot meets red boiler suits.

Thankfully, the confusing plot is carried by three exceptional young actors. Their youthful and cynical dynamic puts the crowd at ease. When matched with their impeccable comic timing, they mask the gigantic holes in the script, for the most part. Some jokes are dragged out to the point of awkwardness, yet Craig, Bailey and Darling’s conviction allows them to plough through relatively unscathed. Once again, this highlights the perfect opportunity for someone with a wider eye for script work to provide some polish.

George Craig’s Y is a nervous, paranoid wreck from start to finish. The audience can tell from the sheer volume of sweat that he produces during the one hour skit that Craig is as hardworking as they come, however there is little variety in his performance. Craig is clearly capable of softer moments, but they were nowhere to be seen in his hyper adrenaline fuelled dialogue.

As George Bailey and Hal Draling grace the stage, equally dumbfounded as to the whereabouts of EUAN, the trio bounce off each other exceptionally in their search for the titular character. George Bailey as X creates an aggressive but likeable figure, switching between the two with great skill. Hal Darling as Z is the relaxed, happy-go-lucky type which successfully provides balance from the jittery Y and the hostile X. The group have this small basement venue in the palms of their hands.

EUAN has a packed audience amused, bewildered but mostly delighted at the charm and wit of our three players. Give it a reworking from an established writer and EUAN could soon be following Fleabag’s lead as a fringe show turned masterpiece. 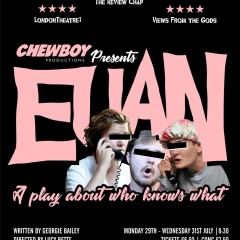 EUAN is fringe theatre to a T.