Les Misérables is probably one of the best known theatre productions across the UK. It is the longest-running West-End musical, and chances are you will have heard at least snippets of it, whether you’ve seen it or not. First a book, then a world-famous musical, then a film, and most recently, a television series - how is it that this tale of love, camaraderie and revolution has come to be loved so widely?

Recently, I was given the opportunity to experience it for myself - the New Vic Theatre Arts Award team are lucky enough to be in contact with Chris Boone, senior production manager for Cameron Mackintosh, who, as well as giving us a backstage tour of the Leicester Curve theatre, also invited us to a dress run of the show at the Birmingham Hippodrome. As you might imagine, we were more than a little bit excited, and this review is bound to be at least somewhat biased.

The production we saw was a dress rehearsal, and there were certain elements that would differ from the version performed that same evening. The lights were still being plotted and there was one technical break before the interval, during which the production team were more relaxed about being seen by the audience. If anything, I feel that this made the experience more interesting, as it allowed me to catch a glimpse of what was going on behind the scenes, whilst also experiencing the show in almost finished conditions.

One of the first things that stood out to me was how dark the lighting was. This had been mentioned when we spoke to the head of LX (lighting effects) in Leicester, but it is remarkable how many lights it takes to make such a dark show. I found this effective as it matched the tone of the story and set the mood well. As some of the lights were still being plotted, throughout the show we could see intense patches of light appear, move to their proper place, then lower in intensity which, though was slightly distracting at the beginning, took very little time to get used to, and did not impede on my overall enjoyment of the show. The set was very impressive, with a cobble-textured floor and runners over which larger pieces of set moved (the smoothness of which I found very satisfying).

Aside from the production values, however, there is an underlying authenticity to the story that has allowed it to be told time and time again without getting tired. The motives and actions of the characters, while being firmly rooted in their own time, remain relatable. This allows the audience the escape of becoming invested in a long-ago revolution, with the cathartic effect of seeing people they can engage with on stage (or page, or screen).

Overall, Les Misérables has managed to bring to life an incredibly powerful story, and I am not surprised that it has been so successful for so long. Also...bring tissues. 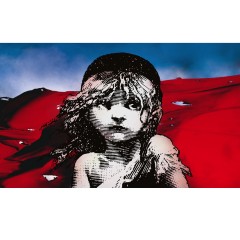