Tell me... what are the 39 steps? The question answered through comedy, chaos and capers!

‘The 39 steps’ has had a prestigious life as it made its way through book, film, radio and theatre. Written by John Buchan in 1915, ‘The 39 Steps’ was first made into a film in 1935 and then in 2005 it was adapted by Patrick Barlow who took the original straight adventure/spy story and converted it into a hilarious but intelligent comedy. Theresa Heskin’s version at The New Vic Theatre has given this old story a fresh and fabulous new lease of life, especially with the traditional New Vic style and stage techniques (like the fights between characters at different ends of the stage) and in-the-round stage space. Also, the entire auditorium was used, for example, actors sitting within the audience along with comedy interaction with audience members throughout which offered an intimacy with the characters and story that only made everything funnier.

The concept of this play is that all characters are played by a cast of four, and this was where most of the hilarity spanned from. Because of the multiple-roles and the melodramatic style, the energy throughout was extraordinary. Each of the four actors – Gareth Cassidy, Rebecca Brewer, Michael Hugo and Isaac Stanmore - were superb in conveying the humour, landing the jokes and connecting with the audience.

The set (designer: Dawn Allsopp) was intelligently and minimally created with just 3 boxes on wheels with frames and chairs. The costumes were simple but effective, having to accommodate for split second changes; it all added to the comedic value with the contrast of hats, coats and skirts, most changes strung together by musical and well-choreographed transitions.

Everything was brought together through the lighting and sound (designed by Daniella Beattie and Alex Day) with perfectly timed and unexpected moments that both astonished and amazed the audience. One of these moments was when a ‘door’ was opened (shown through a slit moving to a rectangle of light and the sound of creaking) to reveal a party on the other side, shown through blue and red flashing light as well as music coming from that direction, to which all characters on stage reacted. The man in the audience next to me whispered an exclamation of “absurd”, almost in awe. This idea was so simple and because it was pulled off so seamlessly and with the mixture of the acting, sound, lighting and movement, it all became side-splittingly funny.

When going to see ’The 39 steps’ I expected a comedy, but it was so much more entertaining than I had imagined. The audience gasped, whooped, chuckled, laughed and even squealed throughout – there was never a boring moment. The whole experience was wonderful and if you still have the opportunity to go and see it… go and see it! 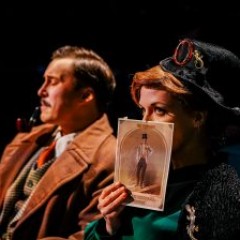 'The 39 Steps' at The New Vic Theatre: Review

Tell me... what are the 39 steps? The question answered through comedy, chaos and capers!