Spies Like Us' production of Woyzeck is a masterful and sublimely choreographed work of physical theatre, making every movement meaningful as it examines the mental decline of Franz Woyzeck, a soldier and an everyman.

The phrase ‘physical theatre’ has a tendency to conjure visions of awkward mimes and interpretative dance. But Spies Like Us’ production of Woyzeck is a sublimely synchronic and challenging work that makes George Buchner’s infamously unfinished play simultaneously contemporary and transcendent.

Every move, every prop, every expression is efficient and valuable. No raised eyebrow or side glance is wasted. I have seen performances by the Royal Ballet which were less in synch and smoothly choreographed.

Even while the audience’s focus is on the actors speaking at that moment, the others never stray from the scene: their faces move like plasticine, contorting and gurning into positions which transform them both into scenery and spectators.

Woyzeck follows the struggle of Franz Woyzeck as his grasp upon reality becomes ever more precarious. A soldier attempting to provide for his new-born son and girlfriend, his relationships with those around him - and the world - are challenged as he is a made a pawn in the games of his superiors.

The play examines the capacity of authority to dehumanise and devastate the life of not only the individual, but of any relationships that individual may have. Subjected to medical experiments by a somewhat sadistic doctor – which includes the consumption of copious amounts of peas – Woyzeck becomes an emblem of the disposability of the poor, achieved through the steady denial of autonomy. And a soldier – considered ‘the lowest form of animal life’ – is the ideal metaphor to illustrate this.

The cast of five are equally dressed in military khakis despite adopting differing characters (a mother, a doctor, a salesman), highlighting our mutual susceptibility to madness and depravation, despite the social positions we may adopt – audience included. The staging is sparse, with just five tin buckets and some plain white sheets, which are diversely used as instruments, stools or walls and despite a small faff with a curtain prop, the work is seamless.

It is a truly astounding work of theatre. The maturity and intelligence of the performances make it difficult to believe that the cast are only in their early twenties, but in fact the entire company of Spies Like Us are still students. Irregardless of their age, watching Woyzeck felt like being privy to the incendiary emergence of the nation’s next generation of great actors.

Although, considering the flawlessness of the production, perhaps they could teach some of the more established performers in Edinburgh a thing or two. 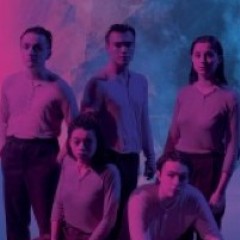 Spies Like Us' production of Woyzeck is a masterful and sublimely choreographed work of physical theatre, making every movement meaningful as it examines the mental decline of Franz Woyzeck, a soldier and an everyman.