WRoNGHEADED, choreographed by Liz Roche, is a multimedia dance performance which utilises spoken word and video, atmospherically projected onto the floor, giving the impression of greater interaction between the recording and the performers.

Created in response to the issues and discussions which have arisen in the past few years around the repeal of the Irish constitution’s 8th amendment, WRoNGHEADED explores the impact and toll of generations of female repression and sexual coercion upon the modern Irish woman’s psyche. Both the poetry and choreography examine the (lack of) agency women have over their bodies.

Elane Feeney’s poetry is played throughout, with little instrumental music interspersed in between. Her words discuss the expenditure of women’s bodies, the effect of assault, how it tears you not into two but into ten. The incorporation of spoken word and modern dance is reminiscent of Wayne McGregor’s Woolf Works, in the urgency of the movement and breathless coherence of limbs and lyrics. At times it can be hard to concentrate on both simultaneously, though overall the combination is a superb exploration of the power of multimedia performance.

There is an empty loneliness about the work, which is heightened by the projections of wide, flat bottomed square containers filled with melting ice. The silence is thawing, but as the clear tubs move and shake, water spills over the edges and it becomes almost difficult to discern whether the floor is actually wet, or just the projection. The first half is slow – the projected dancers in the video are more active than in the performance.

Thankfully, in the second part, the pace picks up – and has energetic, moving, visceral choreography. In fairness, this pace would be difficult for two dancers to sustain for the whole way through – such sections would usually only be performed by a duet in a longer piece. It needs the additional aid of video and poetry to alleviate the pressure from the dancers when there’s only two of them.

The dancers, Sarah Cerneaux and Justine Cooper, are strong and accomplished performers, but at times their synchronicity is disrupted. While this may be a subtle comment on the individuality of each woman, it comes across as a result of slight under-rehearsal. The trend of dancing in jeans – street clothes – is slightly irritating. The notion that these are ‘everywoman’ is evident, but it is hard not to visually feel that the dancers are being physically restricted by the costuming, however stretchy the jeans may be.

Yet when the dancers achieve flow, it is magically powerful.

WRoNGHEADED is playing 15th – 19th August at 1.30pm, at Dance Base (Studio 1)
For tickets and more information, click here 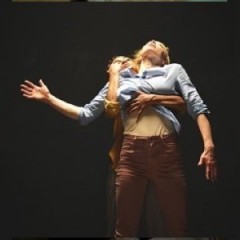 WRoNGHEADED, choreographed by Liz Roche, is a multimedia dance performance which utilises spoken word and video, atmospherically projected onto the floor, giving the impression of greater interaction between the recording and the performers. 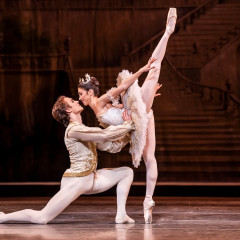