Eshaan Akbar is aiming to teach his audience something new about Islam.

As a lapsed Muslim and now stand-up comedian, Akbar is able to provide a dual perspective of Islam. He humorously discusses Islam’s ‘PR crisis’, and how it is simultaneously possible to criticise both the religion and those who manipulate it for misdeed, without being Islamophobic.

Akbar uses the Quran as the crux of his routine, and comically explains the five pillars of Islam – despite, he says, Islam and satire not being naturally good bedfellows. This doesn’t seem to hinder Akbar though, who instead uses this apparent conflict to his advantage. He frequently refers to Queer Eye and even refers to Allah as ‘a little sasspot’.

His background has given him plenty of material, which he mines well, though undoubtedly there is plenty still to be uncovered. Considering Akbar has only been doing comedy for four years, after taking an eight-week course following being made redundant, he is incredibly at ease behind the microphone.

The room was packed to capacity, and it is easy to see why. Eshaan Akbar is a natural comic, with an ability to tell stories about a 7th century text with the same wit and pathos as those about his own life. His delivery is calm, without the over-eagerness to please of some comedians, yet perfectly in control of his audience.

The end of Akbar’s set is anchored around his mother’s death – a topic Akbar is able to make both humorous and heart-wrenching. And although Akbar ends by giving the audience the ‘gift of Shahada’ – teaching them to recite the Islamic creed, which apparently technically meant the audience had converted – we were left wanting more from the comedian. 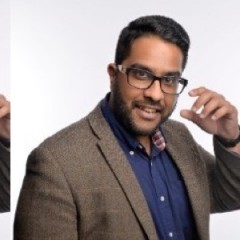 Eshaan Akbar is aiming to teach his audience something new about Islam.