What do you get if you combine Mr. Bean, Liza Minelli and Bubbles from Ab Fab? No, I didn’t think I’d see those three in a sentence either, but then I never thought I’d see an hour of comedy which attempted to explain economic theory through song and dance.

Elf Lyons describes herself as ‘like everyone you’ve ever met on the night bus’. I’ve had some strange encounters on the night bus but never have I ever had a woman dressed as an ‘aggressively winsome’ Liza Minelli explain economic theory to me via song before. And yet, here we are.

I thought the title, ChiffChaff, might’ve been a piece of local idiolect that I was unaware of, but having Googled it, it turns out to be the name of a bird (the show has nothing to do with birds.) This idiosyncrasy seems appropriate for an act which attempts to dissect fiscal responsibility and microeconomics through cabaret, hula hooping, and some slightly questionable mime.

The daughter of an economist, Elf (real name Emily-Anne) has incorporated her childhood lessons in economic theory into an hour-long one-woman show that uses a variety of props and personas to entertain – and educate! Lyons opens the show by shouting the beginning of Charles Dickens’ Tale of Two Cities. The delivery, apparently, is a technique taught to her by her aforementioned father.

Elf engages with the audience, delivering instruments into the hands of luckily eager members, and requesting two compete in a race to blow up a sex doll the fastest. Only one of them has a hole in it - this, she says, is a metaphor for capitalism. There are many an absurd extended metaphor, and it’s somewhat delightful just trying to follow the winding path of them.

Elf isn’t afraid of the truly ludicrous, of aggressively gyrating or adopting – and sliding between – ridiculous accents. In a single sentence she seemed to drift between German, Cockney, American, Chinese, and an odd ‘sexy baby’ which only reminded me of Catherine Ryan’s impression of Cheryl Cole.

Elf is an expert at using her eyebrows to charm, and potentially hypnotise, the audience. With lids bedecked in glitter, she stares and winks and flirts at the audience, manipulating her face into an apparently unlimited array of expressions. She riffs of the elfin, coquettish-economist persona she has created for the show.

Yet in Chiff Chaff, Lyons also confronts the reality of being a millennial attempting to carve out a career in the arts, while working zero-hour contracts and paying £800 a month rent to live in a South-London flat ‘made out of black mould’.

It is an excellent, wonderfully bizarre hour of comedy and economics which doesn’t lead to deflation, and a perfect example of the creative luminescence the Fringe allows to shine. 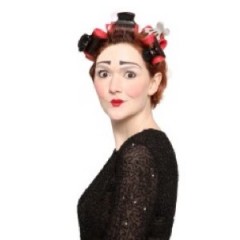 What do you get if you combine Mr. Bean, Liza Minelli and Bubbles from Ab Fab? No, I didn’t think I’d see those three in a sentence either, but then I never thought I’d see an hour of comedy which attempted to explain economic theory through song and dance.