A deceptively slow start aids the tension built up through an incredible show of dance, physical theatre & circus skills that at times meant the audience didn’t know whether to clap in amazement or stay silent in fear of breaking the concentration.

The scene is set with a blackbox stage and a thrust covered in sand.  Ominous.  The sound design, lighting and seven performers work in unison to take you through a journey of discovery in an hour of gasps.

The most noticeable aspect to start is the stark lighting design.  This, combined with a slow start on stage, meant I was initially disappointed considering what I saw of the same company last year.  Theatre design and lighting in particular is meant to all contribute to the piece, but it felt a little disjointed and the lighting was stark rather than supportive.

However, as the show kicked in - still in much the same slow, deliberate, manner - things started to improve and I found the audience enjoying the piece.  It’s like the time you force yourself not to switch a film off after 10 minutes in the hope it improves.  We were rewarded for our perseverance.

When you appreciate the lengths and complexity of the visual design of this show - from the costumes of ‘rags’ and lighting it all comes alive.  They move sand and create their own light & shadow effects as they perform.

My observations of what it takes for these performers? Strength, Balance, Skill.  The dramatic movements, the controlled nature, the being mere millimetres away from falling off the stage when they land or pull each other.  A sense of danger is introduced and you can’t help but marvel. Then a new device is cleverly introduced from the darkness – a large flexible mirror. It moves around and helps the performers interact, gives an element of ‘magic’ through appearances either side and offers you, the audience, a new perspective by seeing the movements from behind.

If this all seems a bit ‘in your head’ its because the show is described as the dreams of the performers, not an overarching narrative that you can determine.  If you’re looking for a fixed story or an 'ending', then you may not be in the right place.  Although arguably each phrase of dance tells its own story and you become invested quickly.

This is achieved through timing and shapes. No words are uttered, but death defying shapes, balances and pleasing circus acts combine.  There is some beautiful duets, there’s complimenting choreography and throws you can’t imagine will take place when you first step foot in the space.

There’s also humour, with a ‘juggle off’ providing a comedic and skilful interlude to the dark intensity of much of the performance.

By the end, you will find yourself staring in awe at the beauty of the piece.  Connect with the land, connect with the characters & go see this show from our Hungarian friends.

Header Image Credit: A still from the trailer 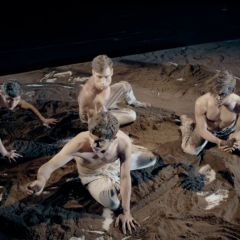 My Land by Recirquel Company

A deceptively slow start aids the tension built up through an incredible show of dance, physical theatre & circus skills that at times meant the audience didn’t know whether to clap in amazement or stay silent in fear of breaking the concentration.