Be a hero and put down your gun

Winners of the Amsterdam Gold award this group perform an unexpectedly funny and compelling story about the history of war.

The play begins with a conversational scene between the actors Sahand and Raphael- as themselves- and the audience. The dynamic between the two actors is playful and natural as they joke easily with members of the audience. They crack jokes about Middle Eastern terrorism and ask the audience to put aside their political correctness and guess which country they come from. By addressing the long-standing stereotypes towards Arabs and Muslims with humour, these two actors manage to diffuse any awkwardness in the audience.

Instead of focusing on these stereotypes and misconceptions, the actors unexpectedly turn their attention to Europe and its history of war. Europe, with its philosophy, democracy and free speech, is examined as a place that is just as warped by war as any other culture.

The play uses letters written by soldiers from the First World War to look at the experience of war. The actors swing in and out of character, disrupting the narrative, as they bring their own culture and experiences back into consideration. They argue about the causes of war, posing the question, ‘is it necessary?’ as it only ever repeats itself.

The theatrical form of the play helps to convey their message through using live music onstage; behind the actors, two musicians sat at the back of the stage providing melancholic melodies to the re-telling of childhood memories and the heart-wrenching letters from fallen soldiers. Consequently, the music created an atmosphere of intimacy whilst carrying the audience into the stories, intensifying the experience as though we were really there.

Although the play started and ended with intensity, some scenes in-between seemed to lose direction: as the play did not follow a consecutive narrative this resulted in some scenes to seem disjointed from the main thread of the story. However, the play closes with an emphatic ending that leaves you with a feeling of realisation, as though a blindfold has suddenly been removed from your eyes.

The argument to ‘put down our guns’, conveys a message of peaceful heroism, suggesting that actions of peace can spread ‘like fire in a dry field’. Despite differences in race and culture, we are all the same, and there will be no end to war until we decide to put down our guns. 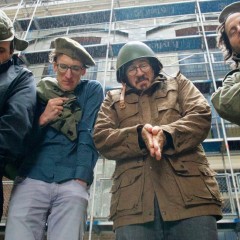 My Father Held A Gun

Be a hero and put down your gun