A show with potential but in need of a last rehearsal

Last Rehearsal is a play about a play. Metafiction of sorts.

It commences with a woman in a spotlight citing prosaic and broken verse. A cliche, of course, but that was the point. This turned out to be critiqued by the actors themselves as an attempt to be ‘cool’ and ‘attractive’.

The play was slow to start with far too many moments of drawn out silences. A heavy repetition of um’s and ah’s and stuttering made it hard to latch onto a fluid narrative. Likewise, the actors’ laboured faces, screwed up in painful earnest to get their words out, felt all too amateur and contrived.

Having said that, the actor’s worked well together and confronted some interesting yet slightly far-reaching philosophical questions about life and faith in art. There were some profound lines, from ‘there is a world beyond this personal crisis of ours’ and a metaphorical allude to ‘stepping out into the sun’ as a way of asking we see the light and do something real.

I liked how the play was influenced by the actors' own lives- three of which were South American and used jokes about the key differences between their respective countries and the UK. This made the characters vividly real.

The final scenes lost me completely. The narrative became quite lofty and felt it was again trying to be original and avant-garde with its peculiarities. But then again, perhaps this was the point and the actor’s were really making true that ‘the play has lost its soul’ and that ‘we have lost trust in words’.

To finish, the opening poem was recited again, yet in Spanish, which had a more theatrical effect; the audience certainly seemed more responsive to this reciting. This suggests that it is things we don’t understand which are more beautiful to experience than the things we do know. Over examinations can ruin our faith and experiences after all.

There were intelligent ideas that, at times, seemed to come together but I was left feeling a little ambivalent. This was due to the slow start and many ‘empty words’ and exchanges in the first half that did not add anything to the overall message. A play with potential but in need of a ‘last rehearsal’. 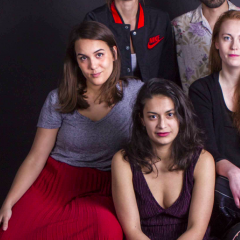 A show with potential but in need of a last rehearsal