LoveHard show the audience their acting and writing abilities with this exciting murder mystery. Both create a range of convincing and unique characters, with enough repetition of character names to keep audiences in the loop. Less attentive audience members are likely to still be able to keep up with characters, but perhaps not all the subplots. The main plot is well written and executed; it will impress the murder mystery fanatics and entertain the average punters alike - even if they end up a little confused.

With no specific main character for the audience to sympathise with, LoveHard rely on intrigue and comedy to keep their audiences invested. These are flawlessly delivered. Comedy takes the forefront for most of the play, and with the flawless delivery of the duo every comic moment delighted the audience. The plot is easy to follow, however, the subplots may go over the head of the inattentive audience member. The twists are well foreshadowed and justified.

I would excitedly recommend watching this show to anyone in Edinburgh. The play works both as well written, genre-conforming and parodic murder mystery and as a comic adventure. I would encourage no punter to be deterred by the concept of a two person play or the concept of a murder mystery; the show is an unforgettable Fringe experience. 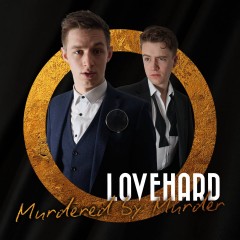