Alasdair jumps over the hurdle of audience interaction by framing his show as a family gathering. This interesting decision allows for a calming atmosphere which will surprise any stand-up enthusiast. This suited his low-energy persona however it could be problematic for a casual audience.

The joke 'like Samuel Beckett on Quantum Leap' summerises Alasdair's comedy. It was nuanced and innovative at the compromise of being a tad niche. The young audience will find this humour troubling, although his pictures of Hitler with a deer are sure to go down well... Even if it is a tad provocative.

The set had no clear humourless moments but there were number of jokes which did not land as well. I couldn't help but think that more energy could have elevated the performance, however, the distinct style was refreshing and innovative.

I would recommend people watch this show with the understanding that a lot of the humour is niche and targeted at an older audience. 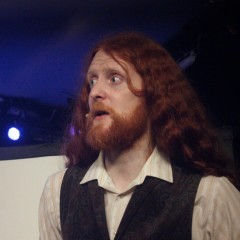