Opening with a clever video, this is a light hearted look at Danny's journey to Edfringe 2017.

The show has a good story arc, with a couple of interesting twists. It's nice that it has a start, middle, and end. You are kept interested in the outcome (which isn't just the fact he actually got to Edfringe 2017) and there are certainly some funny parts of the story that gets the audience chuckling.

It is a late evening show (starting at 10.20pm) and is well put together in quite a fitting space in Underbelly Cowgate. It does well to have you enjoy the story; it is simply Danny O'Brien and a mic on a stage. But his words conjure up the settings very well. He doesn't rely on sets or lots of props, it's all about a well delivered story. The story about his tour on a beaten up old motorbike and the quest for his father thrown in for good measure.

Unfortunately the show isn't as funny or raucous as I feel it could be. Maybe he's kept it quite true and naturalistic, but this promised to be a comedy and it didn't really deliver. It was funny, but only in a light hearted way, and when there's so much to choose from I don't think this show stands out from the crowd. He's clearly a good story teller, and I hope his next show better represents his comedic side. 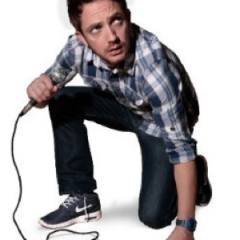 Opening with a clever video, this is a light hearted look at Danny's journey to Edfringe 2017.