Host, Sajeela Kershi, brought together Jing Lusi, Rachel Creeger, Nathalie Kerrio and Hannan Azlan to highlight and have a laugh over women's issues with the theme being 'whence she came'.

The theme was apt and played to Kershi's strengths; with her successful show Immigrant Diaries returning to Edinburgh. This allowed Lusi (Holby City and Stan Lee's Lucky Man), who is appearing in Immigrant Diaries and was born in Shanghai, and Azlan, a Malaysian comedian in Edinburgh for the first time, to tell their stories.

Lusi was the only non-comedian in the group but held her own with a frank, no-holds-barred style of storytelling. She addressed the embarrassment felt by the children of immigrants over their own parents not being 'British enough' when her friends were over. She also had a novel approach to answering the question: 'No, but where are you really from?'

Kerrio is a French comedian who is just visiting Edinburgh to scout how it all works before bringing a show over. Her comedy was well delivered, getting laughs with risqué jokes, but I found the execution a bit, but not entirely, tactless.

Even before she'd gotten up to do her set, the contribution to discussion that Azlan provided demonstrated that she was the highlight of the show. She had exceptional comic timing and remarkable intuition on top of a generally devilish sense of humour.

She got up with her ukulele and it came as somewhat of a surprise when she sang with a genuinely sweet, dulcet voice. Of course, the lyrics were so clever and dove into a perplexing story about a one-night stand that had us all howling. Seeing her later that day walking down George IV Bridge shamelessly arm dancing and singing along with earphones in instilled her as the person everyone wants to be their new friend.

Another highlight was the frankness with which the five spoke about cultural and familial attitudes towards periods. This ran as a talking point throughout as the show takes donations to combat period poverty. Kerrio related this in a visceral way to the theme by pointing out that vaginas are whence we all came.

Funny Women Fest is on daily at midday with a rotating line-up at the Gilded Balloon Teviot for the rest of the Fringe. For tickets and more details, visit the Fringe website. 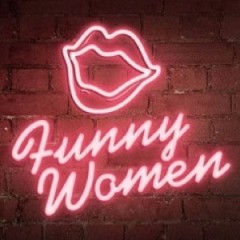 Host, Sajeela Kershi, brought together Jing Lusi, Rachel Creeger, Nathalie Kerrio and Hannan Azlan to highlight and have a laugh over women's issues with the theme being 'whence she came'.