Sister's humour may be highly inappropriate but I bet you won't be able to stop yourself from laughing.

If you came to Sisters to support female comedy then you are in the wrong place, one half of the act kindly informs us. Contrary to all expectation Sisters, are two white young men trying to 'make it' in comedy, and their show is a series of sketches, embedded into a wider narrative around live streaming their show to make it big on the Internet.

Their comedy is astute, making very current and relevant one-liners about being 'woke' and Brexit, and fantastically tapping into the millennial mindset with an entire sketch around the phrase 'is that a thing?'. However, their comedy is also wildly inappropriate with the sketches all oriented around very dark themes - usually involving children, molestation, death, and in some cases all three. Even for the most liberal and socially conscious audience member however, you couldn't deny that it was funny - even if you felt guilty laughing. The sketches involved audience co-operation, lending to some of the best comedy of their show, with the poor, unsuspecting audience member the butt of the joke.

They made good use of multimedia, with a video projection in the background contributing to the 'live stream' narrative - and while this did make the fragmented sketched seem more cohesive it felt a little bit contrived at times, repeating the same joke about how few viewers they had. By far the best sketch came at the end of the show - called the 'narrator', and this was actually, largely void of as much of the dark humour. Admittedly there was another death gag, but the funniest aspect was the way they turned traditional performance on its head for comedy - showing that they are incredibly clever and capable of genuinely funny, intelligent comedy without always needing to segue into dark humour for the easier laughs.

If you love dark humour then Sisters will be right up your street, and even if you don't then I guarantee, you probably won't be able to stop yourself! 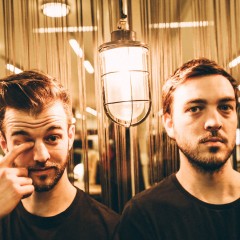 Sister's humour may be highly inappropriate but I bet you won't be able to stop yourself from laughing.