The internet is where hope and grammar goes to die…

Above The Quadrant pub at 22:15 on a Sunday is Dick Coughlan, a long-time comic who is, according to an internet dweller, an Anti-White PC Mangina.

For an hour, Dick takes us on a journey through some of the dark, ridiculous, and grammar offending areas of the internet, intertwined with political musings and and social commentary.

It was very much a one man operation with Coughlan announcing the show to the awaiting audience, greeting everyone at the door, which he then fails to close, before finally introducing himself. The whole time his charming and humorous personality was on display.

Coughlan is a wrecking ball of energy, exploding on stage after an amusing and slightly self-deprecating introduction just to the side of it. He opted to forgo the microphone - his voice successfully filling the room on its own. He made a joke about not wanting to look like Russell Brand, although his style of delivery and stage presence is comparable. I personally don't view that as a bad thing, others might.

Those people may also wince at the few times Coughlan stared at that imaginary 'joke boundary' before hurling himself over it, discussing religion and - perhaps even more controversially - Brexit.

These topics were mere entrées to Coughlan's routine, with the main course being a dissection of the state of the internet, and the people who reside within/upon it. Rejecting modern technology, Coughlan opts to display these demonstrations of illiteracy and hypocrisy through laminated printouts. Given the venue and intimacy of the audience, what might have seemed antiquated felt bizarrely appropriate. Removing the comments from their digital context to a physical medium also helped to highlight how absolutely crazy they sound.

Not every joke worked, and there were points where I felt Coughlan laboured a point out beyond its natural life, wringing every bit of humour out and then some. Despite this though, it is undeniable that the show is hilarious, cutting, and depressingly accurate.

A veteran to the circuit, Dick Coughlan is definitely worth the late night. 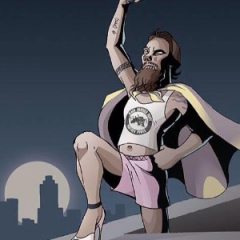 The internet is where hope and grammar goes to die…