For Read a New Book Month I decided to tackle George Orwell's dystopian novel. Here's how I got on...

As a politics graduate, you might be surprised to hear that I haven't read the highly influential political novel by George Orwell, but it's true. Everyone talked about it to the point where I got the gist of what was going on without ever needing to read it. Indeed, so pervasive and prolific are the ideas presented in Nineteen Eighty-Four (1984) that many young people may have engaged with them without ever knowing. Room 101 - that's from 1984. The concept of a thought police? A memory hole? And how can we forget the most obvious - Big Brother. Orwell conceptualised all of these.

So, it goes without saying that 1984 has had a huge social impact, but what of the book itself?

The book was published in 1949, the early part of the Cold War between the USA and USSR. With the gift of hindsight you are able to clearly see the political context encapsulated within its pages - the doubt and mistrust, the rationing, and the negative portrayal of socialism. On the later point, Orwell has created a fictitious political party and accompanying ideology, English Socialism - or Ingsoc, to use 'newspeak'. Like most forms of socialism or communism, it ultimately warps the concept into something unrecognisable, described in the book as 'oligarchical collectivism'; an oxymoronic term that the book would call 'doublethink'.

In 1984, the setting is Great Britain, although it is now known as Airstrip One, a province in the superstate Oceania. The world is now divided into three such superstates, which are perpetually in a state of war. Society in Oceania is divided into three levels. At the point is the Inner Party, with Big Brother sat right at the top. It is not ever made clear whether or not Big Brother is a real human, or an idea anthropomorphised to give the lower classes something to fear/rally around. Beneath them are the Outer Party, of which our protagonist Winston Smith belongs to. Finally, below that are the Proles (proletariat) who comprise 85% of society, but are kept stupefied and poor to prevent them rising up.

Winston is discontent with his life, with vague recollections of how things were before Ingsoc took hold, and fails to adopt doublethink as a mentality, thereby causing him to resent Big Brother and the Party for lying and deceiving. He doubts their motives, and dislikes the brutality and fear tactics they use. His act of rebellion starts small, keeping a journal which amounts to a thought crime. However, over time his actions become more bold, spurred on by Julia, a fellow Outer Party member. Together they eventually seek to become members of the Brotherhood, an anonymous shadowy organisation that are believed to rebel against the Party.

1984 paints a picture of life as abject misery. Everything is controlled, everybody is watched, and nobody is truly safe from purges. The book is a melancholy and depressive read, which successfully plants you into the mindset of Winston. As the story progresses you get more caught up in the world, and the plot twist, although somewhat predictable, adds in a much needed revitalisation.

The level of thought Orwell put into this book was exceptional. Creating 'newspeak' as a separate language adds to further separate the populous, and presents an interesting concept of the development and use of language in society, and how that can control the mood and topic of public debate.

Equally, with so much to be said for the abandonment of surplus or possessions by members of the Party, Orwell successfully manages to make everyday objects, such as a paperweight or a diary, hold exceptional value and power. It develops into wider conversation about who is better off - the Outer Party members or the Proles. The latter have no real surveillance, no uniforms and no strict rules. They are fed propaganda by the Party, but provided with stimuli in the form of alcohol, film and pornography, as well as re-written books, all of while come under the categorisation of prolefeed. While that sounds horrible on the surface, the dichotomy between Proles and Outer Party actually depicts the lives of the middle class as worse.

Yet, for all the ideas the book introduced, and the lasting impact it has had on society as a whole, I still struggle to say that this was an excellent read. The parts I enjoyed were fantastic, with the political theory being well considered and fleshed out. But that was only found in between layers and layers of dense, tediously written narrative that was overly descriptive and at times, almost antagonistically slow. Other times it just rushed along at breakneck speeds, lacking in development. Perhaps it was a deliberate effort to parallel the notion that the individual is irrelevant in the greater narrative, but the device fell flat.

If one was to get particularly analytical over the book, parallels could be drawn to real life in numerous different ways. This is especially true given the Snooper Charter introduced this year. There is an elite class of few who seek to control and oppress those beneath them, while simultaneously espousing platitudes of comradeship and 'all in this together'. We are encouraged to report potential benefit cheats, work hard in the hope of one day climbing up the ranks, and there is a complete departure of common sense - four year olds are getting questioned by police for mispronouncing 'cucumber'. That's in real life by the way, not in the dystopian world themed book.

The two minutes hate, and the media's portrayal of 'the enemy' shares more than a passing resemblance to some of our media today, who have no qualms about brandishing judges as 'Enemies of the People' for simply requiring the Government to adhere to the law. Whipping individuals into a frenzy of hatred and intolerance that then festers and bubbles just below the surface before spilling out into scenes of violence and hate speech.

1984 is a solid foundation upon which many ideas and concepts have been allowed to flourish. It's contribution to wider public debate over political power is venerable, and the colloquialisms that have been adopted and retained for over over 60 years demonstrate the longevity of Orwell's ideas. But while the ideas show no signs of becoming irreverent, the book itself fails to retain interest. Additionally, I think society has become more expectant of a lighter tone and ending.

While it should be praised for all it has created and inspired, both the writing and the ideas have subsequently been advanced to a point where 1984, while still a classic, leaves the reader wanting more. 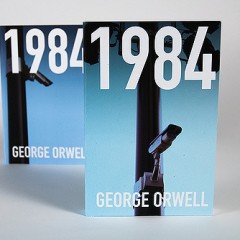 For Read a New Book Month I decided to tackle George Orwell's dystopian novel. Here's how I got on...