From Random Acts Midlands, Victorious is an enigmatic film, a relevant film in the throes of controversial topics.

The protagonist, a drag queen, played by producer, Ben Norris, is Islamophobic and, in their mind, for a reason.

It tosses up a two handed self-interrogation. On one hand, does it serve to antagonise the relationship between religion and the gender non-binary and non-heterosexuality? On the other hand, does it serve to paint one accurate picture of one truth behind the strained relationship? I think, more importantly, it needs to be considered a film that plays devil's advocate, and therefore an effective catalyst for open-mindedness. It does so insofar as it breaks down perceptions of liberalism. Indeed, as the synopsis describes, it attempts to "challenge the preconception that sexual fluidity and liberalism go hand in hand."

The film makes no effort to allay this, nor does it attempt to provide a continuation to or resolve the issue. It just tells us that there's more than meets the eye and that the discriminated against can still discriminate. This is disconcerting because we are used to narratives coming full circle; the classic story structure of setup-conflict-resolution. Indeed, without seeing any arguing, we cannot discern on which side Norris is on and what the 'message' is. But that is the magic of the micro film – Norris has no need to have a side, to make the argument, or to resolve the issue. Play with spectatorial expectations while you can: only in short filmmaking do you get to do that. He does enough by simply showing us that a complex state of affairs can exist even here on this side of the Atlantic.

That said, the feeling of an unresolved issue still left a dull cloud of confusion in my head precisely for the above reasons. We do have responsibilities, as filmmakers, to our topics and the people they affect and therefore, while Victorious is actually a victorious example of filmmaking, a habit ought be reared to really explore stories and motivations and provide platforms on which discussions that need to happen, should happen. I couldn't help thinking, in my bubble of preened, all-encompassing, fulfilling film watching, that the topic was too much for the three minute limit on Random Acts films.

In the same way that the story progressed with tact and delicate editing, I wish the same tact were applied to the production. While there were few mistakes and flashbacks being hard to pull off tastefully, the 'cheating' with visual and sound editing felt unrefined and gave too much attention to the inconsistencies. The delivery on the online video was a low-resolution pool of pixels, too, which took away from inventive cinematography.

More importantly than all of that, though, Victorious redeems itself by exemplifying expertly paced storytelling and experimenting with narrative to make you forget about the effects and mixing. It will cause the best kind of reaction: forcing you to ask, 'then what?' 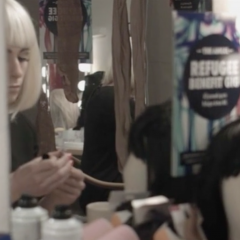 From Random Acts Midlands, Victorious is an enigmatic film, a relevant film in the throes of controversial topics.