Delving deep into a world of trolls, underdogs and other treasures, Open Sky presents a two-person show of rhyme, mime, and a journey through time.

"Once upon a time, there lived a witch."

Performed by Tessa Bide and Jack Kelly, 'Hairy Fairy Tails' was targeted at young children, yet offered a noticeable twist to some stories.

The act combined several traditional fairy tales, as well as the lesser-known variation of the Scottish fable 'Janet and Tam Lin'. Stories of Rapunzel standing up to herself; or Goldilocks discovering you can't judge anyone – including bears - by how they look, these all formed a magical path which challenged the stereotypical endings of fairy tales. Further into the performance we see Rapunzel frustrated with being locked in the tower; her anger eventually changing to a blessed personality transformation of trying and fighting back.

"She had a hunchback, a long crooked nose - with a wart on the end - a broomstick, and...a large cauldron." She's tired of the witch, and tired of her endlessly long blonde plait. Once she is alone in the tower and left to pine for the outside world once again, a musical ensemble begins. Pipe-and-pan bashing creates a memorable melody, composed of the words "I don't care / about hair / I'm not a princess / Don't want to wear a pink dress." Shortly afterwards we see she cuts her hair. Something I see as symbolism for following what you want, and not blindly agreeing to what someone else wants you to do. An interpretation to care about yourself and your ambitions first.

"The witch looked scary…but she had a kind heart." Another part in the series of short 'hairy' fairytales was the story of trolls and nanny goats. The Nanny Goats Tuff refuse to take any nonsense from the Rock 'n' Roll Troll. They work together to show that teamwork counts, and partnership can defeat evil trolls against all odds. Looking around, the children seemed engrossed in a world where characters finally fought for themselves and began to learn lessons only fairy tales can teach. Character Janet rescues Tomlin from the wild fairies, using the power of hugs and love. Even when he turns into a wolf, a snake, a burning stick, she stays by his side. It evokes emotions of survival and hope for all of the audience – not just the kids! Personally I found 'Hairy Fairy Tails' to instil the foundations of moral-compassing in the younger audience of today's interactive theatre. A brilliant compilation of some of the world's best fairy tale classics, together with the musical talents of composer Frank Moon, resulted in an impressive evening. I won't forget some of the shared life lessons for both girls and boys: stay open minded, always be kind…and do your best to be brave when confronted by trolls! 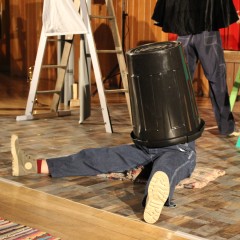 Delving deep into a world of trolls, underdogs and other treasures, Open Sky presents a two-person show of rhyme, mime, and a journey through time.