A talk with the creators and actors of the fantastic interactive show, Hairy Fairy Tales, performed at Wem Town Hall earlier this month.

Tessa Bide and Jack Kelly have led separate careers until this Open Sky performance. Kelly has even played a role in a Swedish film (not yet released) and Bide has her own production company. However the two actors came together to play fantastic roles in 'Hairy Fairy Tails'! Here's my interview with them.

We didn't know each other at all when we first started working on the job, but it's been one of the highlights to get on so well with Jack. It doesn't always happen that way.

What inspired you to audition for the parts?

Kelly: Claire and I studied at the same drama school in Paris at different times, and so she'd emailed the school and said "I'm looking for UK based performances". They emailed me and said there's a company in the UK looking for actors.

Bide: Because the pieces were devised, it meant that we were coming up with stuff in the rehearsal room all the time. And I think if you don't have a decent relationship it's really hard to generate new stuff and get along with it.

Kelly: I think that's one of the upsides to the job – you've got to get on with people. We had three weeks and an extra weekend the week before.

Bide: Normally my comfort zone is within a full week, that's the dream and what you probably aim for, but with funding what it is…you can't really get that. This kind of show has a lot of elements in that you just remember what you're doing, and it has a lot of work with the audience – it's only a performance so it's going to naturally settle in and get more comfortable as we go.

Kelly: And you need a concentrated run of doing it. When you start doing shows every day then you really get comfortable. But this has had breaks, a few days and another performance, that puts a little strain.

How do you feel about the storyline of the performance, and the moral compass built into it?

Bide: Fairy tales are like the classic morality tales, that's what they were designed for. But some of the morals in them have been…outdated, I feel, or lost along the way. So I think it's nice to remember them for what they are but to put our own morals on them.

Kelly: I think Disney's got a lot to answer for, because they kind of made everything have to have a happy ending. And that's not the function of fairy tales. They are there to teach children stories about the world and make you ask questions. It's nice to re-invent them. There isn't a definitive version of a fairy tale.

What advice would you give to aspiring actors or actresses aspiring to do work similar to yourselves?

Kelly: Find what it is you really like. At this moment if you're doing something, plays or youth theatre or whatever, ask yourself what is it about that you enjoy, and pursue that. If you're doing school plays and you say you want to be a Hollywood movie star…you have no experience of what that's like. The thing that will sustain you will be fulfilling those criteria, hanging onto that thing that really fires you up.

Bide: A lot of us make our own work as well, because it has a more reliable income you can be more in control of. What I'd say is don't think there is only one way into acting – I didn't train professionally or go to drama school – but getting as much experience is just as valuable too. If you wanted to do theatre, badger local theatre companies, that's what I did. I got a job there and started my own company. 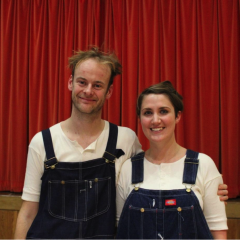 A talk with the creators and actors of the fantastic interactive show, Hairy Fairy Tales, performed at Wem Town Hall earlier this month.