From Random Acts Midlands, Francis Quigley's short film 'Contactless' forces us to delve into a seemingly dystopian world we have not yet encountered before.

One where Jeremy Corbyn is a politician-turned-style-mogul whilst student fees are hiked to £50,000 per year. Captured through the lens of an accurately portrayed BBC style bulletin 'Zero News', complete with an associate of the BBC, there is something eerily worrying about this new world in front of us. That is, the fact that it could all come true in a few years time. With Brexit, Drumpf and North Korea being the main topics discussed in the news, amongst taxes, Quigley deviates from the norms of making the audience fear them but instead makes the audience mock them.

Complete with choppy jump cuts to goats, cheesy cyclists and a homeless man throwing up, Quigley suggests there is more light within the situation than we are exposed to by the media, which is a very perceptive idea for such an upcoming film maker. The idea of the class struggle is hinted throughout high camera shots used on the highest earners within the film, richly complimented by low lit lighting to create shadows on his face - almost like an archetypal villain. Whilst the people on lower incomes are seen as bouncy, smiley more approachable heroes we want to identify with and see succeed. Quigley has cast quality actors such as Lawrence Russell and Emily Clayton, both with ample acting achievements between them such as studying at the acclaimed East 15 Acting School, which I have to admit I was not expecting from a low budget production.

However, I must admit I did have to watch the film several times to understand the idea as on the first round of viewing I was confused by the absurdities used such as inappropriate clip art images of reproductive organs. At first I was confused by this, due to the disparity they brought. Again, being a woman, I felt they made the film slightly more 'laddish', which is a shame as the film discusses issues universally affected by all in society and they actually make the film slightly incomprehensible alongside tacky.

That being said, the basis is there for a great future in film. Film is a powerful medium to communicate with the masses and I know that this idea will work as the general public are all affected, in some way or another, by those who command. Maybe this film could strike a match on a career to help give a voice to the voiceless in society. I hope so. 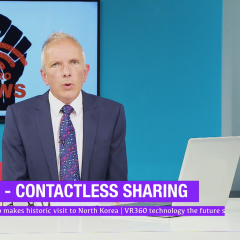 From Random Acts Midlands, Francis Quigley's short film 'Contactless' forces us to delve into a seemingly dystopian world we have not yet encountered before. 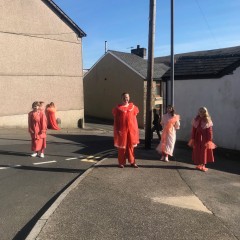