Clare Balding discusses her first children's book - The Racehorse Who Wouldn't Gallop and her inspirations behind it.

The first thing Claire Balding asks the audience is 'who has a brother or sister?' A sea of hands shows that many in the audience relate to Charlie, the character of Balding's first children's book, The Racehorse Who Wouldn't Gallop. Charlie is teased by her older brothers, a feeling which the audience seems to understand, and Balding's novel gives Charlie a chance to get out from underneath them and prove herself, with her imagination and drive. An animated video advert featuring illustrations from the novel sets the scene for the story, in which horse-mad Charlie plans to earn her family money by buying a racehorse to enter in a derby. The only problem is her horse won't gallop without his friend. Can Charlie train him and save the day?

The equestrian theme of the novel is clearly inspired by Balding's own background as having grown up with, and around horses, and she describes Charlie as also being inspired by her young niece. The book is centred around achieving dreams, with strong influences from Balding's involvement with the Olympics and equestrian sports. These Olympic influences turn out to be of greater interest to fans of the book with Balding hinting that the next games in Tokyo might be a future aim for Charlie.

Balding's involvement with the audience is brilliant, inviting questions to interact with younger audience members, with an element of comedy more pitched towards older kids and parents. The use of media in the session adds variety, with a video interview with a jockey, and a number of images from Balding's own life being shown, as well as the trailer.

It became clear that there were some major horse fans in the audience, as well as readers, with a number of brilliant questions about horses, as well as the book itself and Balding as a writer. Balding's first children's book seems to be a hit, and possibly the start of a very successful career as a children's writer. 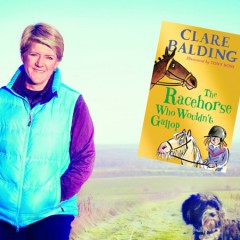 Clare Balding discusses her first children's book - The Racehorse Who Wouldn't Gallop and her inspirations behind it.