This is my In The Heights review for both times I visited the Barrio!

At the end of August I was lucky enough to go down to the Barrio and watch In The Heights for the second time. The story follows a group of young, Latin neighbours trying to fit into New York and make a life for themselves. The group have grown up together, but are slowly drifting apart because of school, jobs and the fact that the rent in the neighbour is being put up because of gentrification. The show was by Lin Manuel Miranda, who, if you've read some of my other posts you'll know i'm a little bit obsessed with. I went down to watch the show for the first time, without really knowing what it was about and what to expect, just that I was going to watch a performance created by one of the most talented men on the planet right now.

The Theatre was one of the most amazing theatres I have ever been to. As soon as you walk in you're greeted with the smell of popcorn, the layout of the front of house is just so so beautiful and even the toilets looked amazing. The staging of it was different to the other shows that I had seen. The stage was in the middle of the room with seats on either side, almost like an in the round performance but the seats weren't all the way around. I know from previous performances in college how hard it is to do a show in the round and making sure you're aware of the audience at all times so that they can see you, I have so much respect for the actors in that show doing that every night! Some people in the audience didn't quite understand why they couldn't see some parts of the scene because they were being directed to the other side of the audience.

The first time I went to watch the show I saw Christine Aladdo as Vanessa. Like I said I didn't really know what to expect from the show, so when Christine came out and sang 'It Wont Be Long Now' I was in awe. I was totally blown away by her voice, she has the ability to sing so sweet and soft like a Disney Princess but then completely belt out the song and make the audience go wild!

Both times I was fortunate enough to witness Josie Benson's magic. Hearing Josie sing 'Enough' just filled me with pure, feisty, sassy energy. The way she sings that song, theres no way any women in the audience that night couldn't feel empowered by her performance! It just made me want to stand up and yell "YASSSS QUEEENNN!!" which wouldn't of been appropriate, so I'll just express that feeling in this review!

Now lets talk about Phillipa Stefani for a minute. I have never seen anyone with as much talent as Phillipa. Both times I saw her, she had the audience in the palm of her hands! Her comedy timing was perfect and the amount of sass she brings to the character of Daniela is next level. The chemistry that she has with whoever is playing Vanessa or Carla (they were different both times) is nothing like I've ever seen before. If there is a Phillipa Stefani School Of Sass and Acting then sign me up! Unfortunately she has now finished her run in In The Heights, but fortunately you can see her in the upcoming Rent tour, starting in October!

The first Usnavi I saw was Michael Cortez and fell in love. The way he plays the character is just so sweet and made me feel like I need to find my own Usnavi who'll take me dancing and give me free coffee! I saw Cleve September as my first Sonny, and all I can say is 'You are so cute!'

If you haven't already, get yourself down to Kings Cross Theatre and watch the show! The cast change is happening on the 16th of September so you'll be able to see some new faces share their talents. The show has just extended it's run for the final time, so you've got until January to see it! GO GO GO! 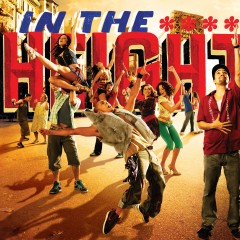 This is my In The Heights review for both times I visited the Barrio!