Smith's show begins with her playing the guitar and singing on stage in (almost) complete darkness. That lighting state does not last long, however, as she is not very confident playing the guitar and needs light to see where to place her fingers. Her self-deprecating running commentary throughout the song prevents it from becoming too awkward, and when she later revealed why she chose to start her show with a talent she is still new at, my respect and admiration for her grew significantly.

In a very small and intimate venue, Smith interacts well with her audience, with an engaging and endearing narrative that, while it didn't make me laugh, did make me smile. Her show focuses on relationships and her comments were interesting and insightful, if not always amusing. She is very open and honest throughout, and often gets distracted by tangents, which give a clear insight into her character. The show felt slightly disjointed, however, with Smith jumping from one topic to the next sometimes without pause.

The show was born as a result of the end of a bad relationship, and Smith's outlook on life and decision to do comedy at the Fringe simply because she can is inspiring and refreshing. She may have more of a future in psychology than comedy, but I admire her greatly for putting herself out there. Definitely one to see if you need inspiration!

Amée Smith: Relax, It's Not About You is on at 15:00 every day until August 29th at Underbelly Med Quad. 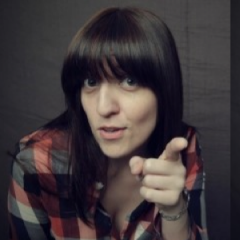 Amée Smith: Relax, It's Not About You