Despite the interesting description, for me, the show fell flat. Plugged as a 'political comedy', I was hoping for a show that induced smiles and laughter. Unfortunately, neither myself, nor the rest of the audience, were laughing. A comedy should have the ability to evoke laughter regardless of the audience's knowledge of the topic in hand.

The story was, on the whole, portrayed fairly clearly, but there were issues with the style in which the story was conveyed to the audience. As well as this, through several of the interludes where the two male actors were mirroring each other in movement, I watched uncomfortably as they seemed to weave in and out of being in time with each other and the backing music. This could be easily rendered by them watching each other more often, as when they did, they were perfectly in sync.

The gimmicky dancing that should have made me laugh, made me grimace, and the drawn out costume changes made me doubt whether they truly had enough content to fill a one-hour time slot. The lighting, which I hoped would be the redeeming feature, was very nicely done, until one of the actors spoke an entire aside in darkness, whilst the actor next to her remained lit. The sound techniques used were clever and between that and the lighting they portrayed each change in location well. The set a fraction too big for the space, meaning there were several bumps and pauses as the cast attempted to get a smaller piece on and off stage on wheels.

The acting itself weren't bad. Overlooking the occasional forgetfulness, they showed skill and were able to keep the audience's attention for the duration of the show. The costume changes were handled calmly, even if they did seem to take forever, although I didn't think the costumes themselves were anything out of the ordinary. Also, in a few cases, the long costume changes weren't necessary to portray a change of character.

Overall, I was by no means enamoured by this show. I liked the story behind it and the concept of the show, but the show itself did not deliver, which was a shame.

The Chicken Trial is on at 14:15 until August 28th, excluding 15th and 22nd, at Pleasance Cellar. For more information, click here. 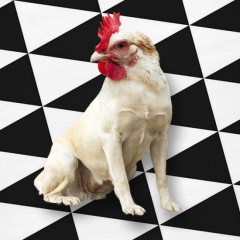