Craig David was the very last act on Saturday at Southhampton's Common People festival, and after a long day you'd expect the crowd to be tiring out. Craig certainly didn't let this happen. He had practically the whole common pumping, from the very first song he performed on the festival's Common Stage.

He made it very clear that he hasn't forgotten about his Southampton roots, and started his performance off with the words: "You can take the boy out of Southampton, but you can't take Southampton out of the boy!" Obviously, this sent the largely local crowd into overdrive, and he kept referencing his hometown throughout the night, always to huge applause.

One thing that was clear as day, was that David certainly hasn't lost it in the time he's been away. He may have had a break, but his stage presence is still top notch, as well as his singing voice. Not even just his singing voice, but his ability to rap too. David is a very good rapper. I've heard glimmers of this on his tracks before, and have seen him dabbling in live performances on TV, but watching him really and truly live, in the flesh, is a completely different experience. It can be hit and miss seeing your favourite musicians live, the sound's never quite the same and this can sometimes be a bad thing; certainly not in this case.

Having been away for a while, he could have been tempted to stick to his newer stuff, but he performed some of his classics too. He started off with his 2000 hit Fill Me In - still probably his most famous - followed by a belting Rewind, which the crowd responded extremely well to. Certain tracks just never get old, and these two are prime examples of that. He then performed his newest track, When the Bassline Drops. Whilst this is fairly new, the fans were just as excited about it and sang the words like it had been out for years.

What really struck me throughout was his passion for performing in his hometown. You could see how happy he was to be home, the shoutouts really didn't seem to just be for the applause; he seemed even more excited than some of his fans in the crowd.

All I can tell you is to watch Craig David live if you haven't. The experience is unreal, and if I could do it all over again, I certainly would. 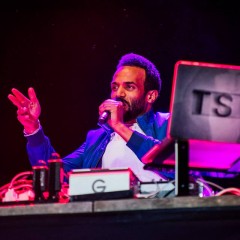