This album is more than just a personal favourite.

The first thing I noticed about this album, which was released back in 2006, was it's awe-inspiring loud & quiet dynamic, which is quite rare nowadays. It was popular back in the glory days of the grunge and alt-rock scene in the 1990's, but in emo music? This was something strange to me, considering I was banging out the more punk-influenced bands like My Chemical Romance and Taking Back Sunday. So, for me, the depth and maturity of the album was rather stylish for the emo genre, I was used to loud anthemic songs that sold millions worldwide back in the mid-2000s.

Clearly, Brand New aren't your average indie rock or emo band. Although their first album was a pop-punk effort that resulted in an almost cult-like following for the band, it took a year later for the whole world to pay attention to their second album, Deja Entendu, which showed them progressing to indie rock/post-hardcore and brought the band mainstream success with singles like 'Sic Transit Gloria...Gloria Fades' and 'The Quiet Things That No One Ever Knows' - this album is now considered a staple in early noughties emo-rock. So what about their third effort?

What makes this different to other emo albums is the artistry. It displays what is a genuine emo sound - dark themes, emotional and introspective lyrics - but that's not all. The excellent use of vocals and guitars to switch between quiet indie rock and angsty post-hardcore has a really great way of making this album stand strong amongst the other band's works. Compared with Deja Entendu, this album is much more mature and focused on the music, which reflects the band's avoidance of recording live performances or music videos for the sake of their privacy, so you have no choice but to listen to the music.

Additionally, the songs are much more deeper in context, especially 'Limousine' which speaks of the death of a 7-year-old girl who was killed on her way home from her parent's wedding in the area where the lead singer was living at the time. 'Sowing Season (Yeah)' speaks of duality and the impact of our choices in life, i.e. would we go back and change them if we could? This album holds so much power, it saddens me that it never reached its full potential. 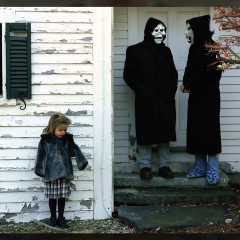 Brand New: The Devil And God Are Raging Inside Me

This album is more than just a personal favourite.