You'd expect Christian O'Connell, celebrated breakfast radio DJ, to come out and express an infectious confidence and have a wide presence on stage. You wouldn't be disappointed.

However, confidence will only get you so far on a Fringe stage.

He had many fans in the audience which helped him out a lot. This aged the crowd to closer to his shows demographic. This is something I noticed as I looked down on the bulk of the audience as I sat on a balcony with a railing so high I had to either crane over it or see O'Connell or crouch under it to watch him through a metal mesh.

From entering to a furore of applause the show launched into a mishmash of jokes which, although funny, have stood the test of time but were lacking in originality. I imagine his attempt to go from the studio to the stage was a very studied one. It was as if he was trying too hard to be funny. He presented himself like a DJ, not a comedian. He was confident and delivered his jokes and anecdotes with the full assurance that he would get a reaction. Even through his roaming around the stage and what he was wearing he looked like he knew what he was doing and he'd be liked for it.

There is always a list of three things per year, events or people, which dominate the comedy at the Fringe. This year, they were:

3. Scottish independence (or the lack thereof)

2. The General Election/Tory scepticism – if they were really on the ball, they'd address the Labour leadership

Most comedians don't bother addressing all three and this is a good idea because it runs the risk of running out of space for original gags. O'Connell played it safe in this regard but he addressed Saville-gate in abundance. The laughs were more automatic than original.

Any great laughs were derived from the tweets he receives as a result of his quasi-celebrity. Something that didn't come from him but from his public, really. Twitter accounts of celebrities are breeding grounds for hilarity.

A mammoth effort. His routine rolls out as if he's been an apprentice of comedy legends – studying their ways and how to be the best. Alas, it requires some individuality and complexity. 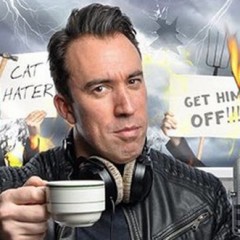 You'd expect Christian O'Connell, celebrated breakfast radio DJ, to come out and express an infectious confidence and have a wide presence on stage. You wouldn't be disappointed.