Simply stupendous, there is nothing here to not like!

I love musicals, I love improv'. My favourite show when I was younger was "Whose Line is it Anyway" and my favourite part of the show was always the musical sections. This show is as the title suggests, a completely improvised musical. Essentially this show is the closest thing I will ever experience to complete and utter joy.

No two nights are the same, as is the nature of improvisation and every night is bound to be simply stupendous! The performers are all incredibly talented as performers and improvisers in their own right, each contributing equally and performing with a seemingly rehearsed brilliance. Special mention I feel goes to the musicians who were playing as though they had the sheet music right in front of them, from the moment we entered the auditorium they were serenading us with international styles of music, from Jazz to Latin they seemed completely in sync, and were playing with complete confidence.

The proceedings are relatively simple, but do depend on a little bit of musical knowledge from the audience, as the audience is where they get all of their inspiration. So make sure you read up on musicals and their various styles, this will also help with your appreciation of the humour. The audience is asked for 5 plays, each with contrasting styles. There is then the question of subject matter. For my show the theme was a Dentists convention, and the show was called "Driller" much to the delight of the MC, to have shows two nights in a row that had a title that was pertaining to a Michael Jackson song title!

There is nothing about this show that is unlikeable – unless you're not a fan of musicals, in which case why are you going to watch a show that says in the title that it is an improvised musical? Tickets sell out massively each night, attracting people that enjoy all the forms of art, and if that's not the best endorsement, then I don't know what is!

Showstopper! The Improvised Musical is performing at the Pleasance Courtyard every day until the 30th August. The show runs for 1 hour 10 minutes. Tickets and more information are available on the Fringe website. 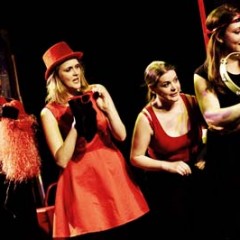 Simply stupendous, there is nothing here to not like!